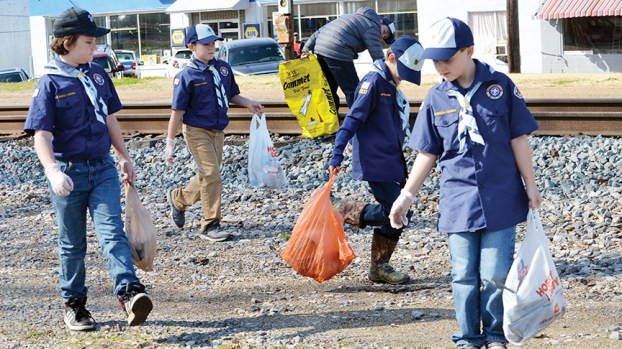 Photo by Donna Campbell Members of the Scouts of America Bobcat Troop 119 of Brookhaven spent a recent Saturday morning picking up trash in the area between the old and new train depots, filling seven plastic grocery bags. Their effort not only helped them earn Paws of Action badges, but cleaned up part of the city. Pictured are, from left: Rocky Jackson, Jameson Pannell, Darrin Dunaway, Lucas Phillips and Quinn Smith. 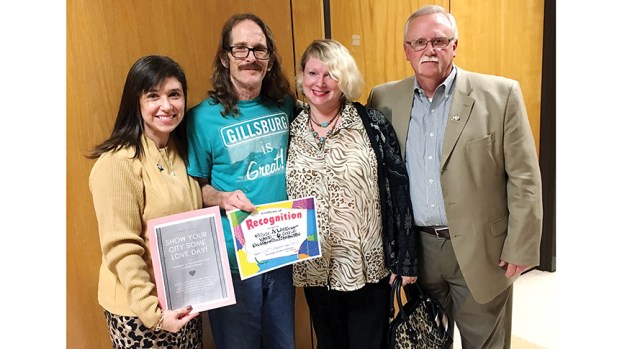 With just a week to go before Valentine’s Day, Brookhaven aldermen are asking people to show the city some love.

Aldermen Tuesday night recognized Bruce Lambert for his continuing efforts to clean up Brookhaven as a kick-off to “Show Your City Some Love Day.” The cleanup initiative starts Feb. 14.

Lambert can be seen at least three days a week with his bicycle and a bucket, using a pine cone grabber to pick up trash along North Jackson Street, Industrial Park Road and Hwy. 51 North, said Ward 6 Alderwoman Shelley Harrigill, who invited Lambert to the meeting to receive a certificate of appreciation.

“Not a week goes by that you won’t find him on the side of the road picking up trash,” she said.

The certificate includes a quote from the late President John F. Kennedy: “One person can make a difference.”

“He is a dedicated volunteer who, without being asked, saw a need to help keep our area clean and free from litter,” she said. “He takes personal pride in keeping Brookhaven Beautiful by picking up in and around the area where he lives, and on what he considers to be the main thoroughfares into town. He is already doing what we are asking others to do starting on Valentine’s Day, Thursday of next week, for ‘Show Your City Some Love Day.’”

Aldermen, along with the Brookhaven-Lincoln County Chamber of Commerce, Lincoln County Master Gardeners, the Community Appearance Committee and Brookhaven Beautiful, are urging residents and business owners to take pride in their community by keeping green spaces clean.

“We know that if we all do a little we can make a big difference in Brookhaven and Lincoln County to combat unsightly litter,” said Chamber Program Director Katie Nations. “No matter how much money we spend on landscaping and cutting things back, if trash remains scattered, it will continue to look unkempt.”

Nations hopes the entire community will come together each Thursday at 10 a.m. to tidy up.

“Can you imagine the difference we could make if the entire town did this once a week?” she said.

They’re asking students, business owners, residents, churches and civic groups to stop at 10 a.m.  each Thursday and get outside with a bag, basket or bucket for 10 to 20 minutes and pick up any visible litter.

“Join us in picking up litter directly outside your space. We can make a big difference in the appearance of our beautiful town,” she said. “We are wanting to start a conversation regarding pride in where you live. Not just your home, but where you work, where your kids go to school, the entrance to your favorite restaurant, the streets you travel each day. If we all did a little we could make a big impact on Brookhaven and Lincoln County.”

Nations said they hope to grow that conversation into expanding green space in areas around Brookhaven, recycling and volunteering for beautification projects.