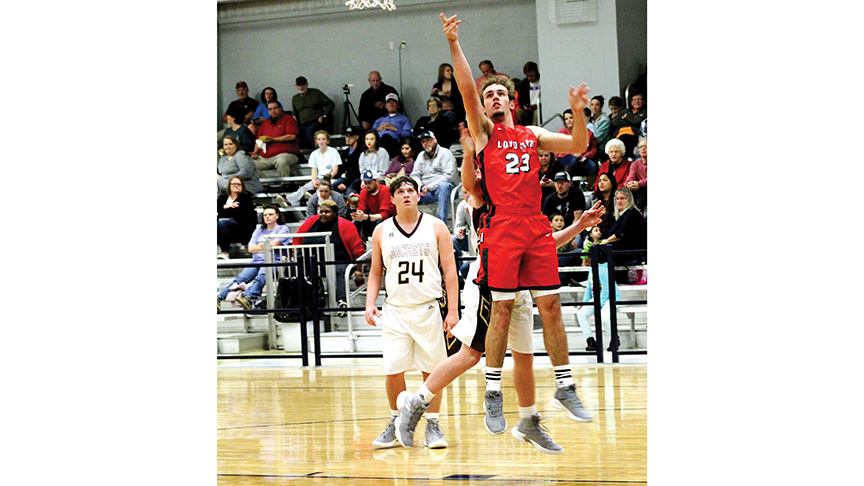 Photo by Katie Furr Dane Smith scored a game high 23 points for Loyd Star on Tuesday in their 59-57 win over West Lincoln.

It was the third meeting of the season between the two teams. In the first matchup at the county tournament West Lincoln cruised to a 61-37 win. When the two teams next met on Jan. 18 the Lady Hornets took a first quarter lead before West Lincoln used a run in the next period to speed the game up on the way to a 62-39 win.

On Tuesday it was Loyd Star again leading early, but this time not letting West Lincoln control the flow of the game.

“We settled into our man to man defense,” said Loyd Star junior Carly Beth Wallace. “We were able to score double digits every quarter and played ball like we were supposed to.”

Behind their defense, the Lady Hornets were able to edge out the Lady Bears by a score of 16-14 at the end of the first quarter. Loyd Star also held a tight 26-25 lead at halftime.

“We got off to a good start and stayed consistent all game,” said Wallace. “We had a goal of scoring double digits every quarter and we were only short of that goal in the fourth. We could’ve done some things differently, but the pace of the game stayed the same. We stayed ahead and played great tonight.”

Heading into the fourth quarter Loyd Star led 40-39, but senior Megan Gerald would quickly score at the start of the period to give WL the lead. Loyd Star answered back to tie the game on an Aubrey Britt free-throw.

The fourth quarter was nip-and-tuck as the Lady Hornets were able to hold West Lincoln off throughout a heated final eight minutes of action.

“We came out and were ready to play,” said Lady Hornet head coach Christi Terrell. “The excitement and momentum were there. We missed a lot of good shots, but we played solid defense and played hard on offense. The girls played well and I’m extremely proud of them.”

Senior center Sarah Britt led the Loyd Star offense with 14 points. Britt did go down with a lower leg injury late in the game. Aubrey Britt and Christie Patterson scored eight points apiece for the Lady Hornets. TaMaria Townsend and Taylor Smith scored six points each and Wallace rounded out the LS scoring with five points.

West Lincoln was victorious 63-54 when the two teams first met at the county tournament, but Loyd Star has been on a tear of late. The Hornets had won 8-of-9 since the Christmas break including a 62-59 win at West Lincoln on Jan. 18.

On Tuesday the pace was fast as neither team gained much separation.

Loyd Star led 14-11 after the first quarter and 24-21 at halftime. In the third quarter Loyd Star was able to create a little breathing room as they were up 46-39 at the start of the final period. West Lincoln wouldn’t go away though and tied things up 51-51 with four minutes remaining in the game.

The win was secured by Loyd Star on late free throws knocked down by Micah Calcote.

“It was a great game by the boys tonight,” said Loyd Star coach Seth Britt. “I think it was a team effort to come through right there at the end. Hats off to West Lincoln for a great push they made late. I think my guys played really well at the end to pick up the win.”

West Lincoln coach Brooks Smith — speaking on how both his teams played — thought the home team was the aggressor on Tuesday night.

“Good things usually happen for the teams that play the toughest, hardest, and are more aggressive on both ends,” said Smith. “Tonight, that was Loyd Star in both games. It’s never a good sign when you miss as many shots as we did in the paint. We’re on to Bogue Chitto.”

The Bogue Chitto at West Lincoln game on Friday night will determine top seed in the region tournament that takes place next week at Amite County High School. The Lady Bears are defending region champs.