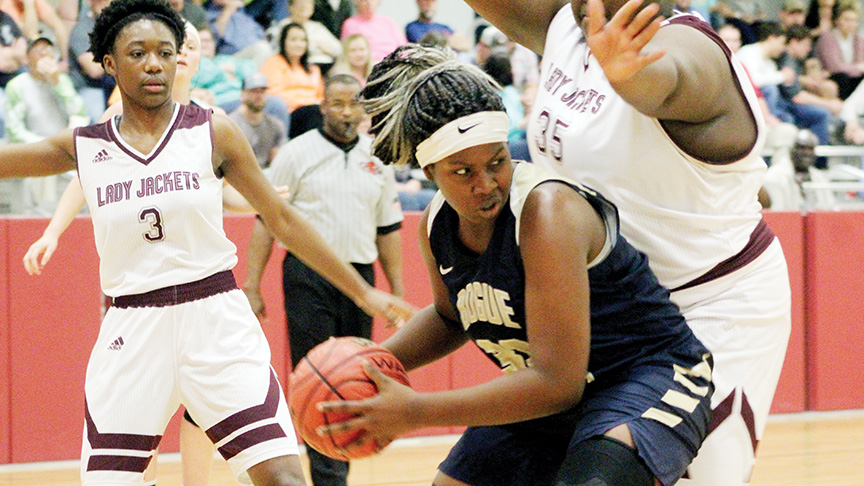 Photo by Cliff Furr Kamilah Clay of Bogue Chitto operates on the baseline against the defense of Alex McGee of Enterprise on Tuesday. Clay scored nine points for the Lady Bobcats. Bogue Chitto hosts West Lincoln Friday in a game that will determine who will be top seed in the Region7-2A tournament next week at Amite County.

It was senior night and that’s something the Lady Jackets don’t have a ton of as the young team has been in rebuilding mode this season. The senior trio of Breyauna Johnson, Britany Barnett, and Gracie Thompson were honored before the game.

In the early going Enterprise was able to keep things close before the Lady Bobcats began to get cooking from the outside.

Late in the first quarter BC got a long jumper by Karly Leake and a 3-pointer by Tyuna Brumfield that pushed their lead out to 14-4 after the first period. The Lady Bobcats are a patient group offensively. They’re content to move the ball back and forth among Leake, Brumfield, and Cheyenne Hall until an open shot become available.

On Tuesday it was Brumfield who had the hot hand as she finished with a game-high 18 points that included four made 3-pointers. Leake finished with 10 points. The Lady Cats were down a starter as DeAnna Edwards missed the game due to illness.

The duo of Kamilah Clay and Katelynn Palmer played well inside for the Lady Bobcats as Enterprise had no answer for the physicality that BC can present on the boards. Clay scored nine points and Palmer added six of her own.

For first year head coach Robby Walters, the long season that is on the cusp of ending has been about establishing an identity and becoming a team that executes.

“We’ve shot the ball much better as the season has gone on,” said Walters. “The girls know that we’re not a team built on any one star. We play together and for each other. They’re blue collar kids that give me their best effort.”

Bogue Chitto led 25-8 at halftime, but Enterprise didn’t stop fighting. The first three minutes of the second half were sloppy with both teams turning the ball over more than they shot it. K.K. Jones of Enterprise broke the drought with a steal and layup with five minutes remaining in the third quarter.

A Britany Barnett 3-pointer later in the period pulled Enterprise within 28-13 with 2:44 remaining in the third quarter, but the Bogue Chitto offense began to wake up and maintained their lead throughout the rest of the game.

“At one point we had one eighth grader and four freshmen out there,” said Lady Jacket head coach Shane Adams. “They’ve gotten better and as the year has gone on and even tonight in the game we played better in the second half.”

Bogue Chitto concludes the regular season Friday with a huge division deciding matchup against West Lincoln. The Lady Bears defeated Bogue Chitto 42-38 the last time the teams met. The winner of their game Friday will be the top seed in the region tournament.