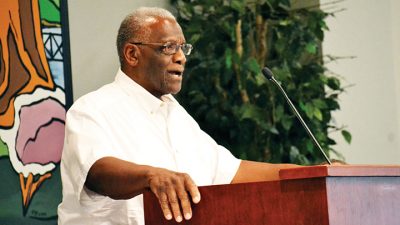 A longtime educator will continue to oversee the direction of the Brookhaven School District as a member of the Board of Trustees.

Willie “Doc” Harrison will serve a second five-year term on the board following a recommendation this week by Brookhaven Mayor Joe Cox.

“Mr. Harrison was an obvious choice for re-appointment. His service to the Brookhaven School District has consistently offered positive leadership,” Cox said Thursday. “Our schools are the gateway to growth for Brookhaven. In my opinion, Mr. Harrison is that person to continue positive growth.”

The Board of Trustees consists of five members — three appointed by the mayor and board of aldermen and two elected by the people who live outside the corporate limits. The term of office begins on the first Saturday of March following the appointment or election of a trustee in February. Each member serves a period of five years so the term of one member expires each year.

Cox appointed Robb Massengill to the board in 2018, who replaced Pat Lowery after his term was up.

Others on the board are Lucy Shell and Erin Smith, who are both elected, and James Tillman, who was appointed.

Harrison, a former assistant principal at Brookhaven High School, first joined the board in December 2008 after he was appointed to fill the seat following the death of Carl Holloway. Holloway’s term would have ended in March 2009.

In other business Tuesday, aldermen:

• Approved to hire Kayla Moore as a certified police officer at $31,010 annually.

• Approved the retirement of Rob Smith from the Brookhaven Police Department effective Jan. 31.

• Approved the adoption of the state mileage reimbursement for 2019 to 58 cents per mile.

• Approved the promotion of Kerri Huff from certified officer to patrolman at an annual salary of $33,884.

• Approved a length-of-service promotion and increase in annual salary for Darlene Portrey, police dispatcher for 15 years, to $33,884.

• Following an executive session, aldermen voted 6-0 to terminate the employment of police officer Kris Coleman for “just cause” at Police Chief Kenneth Collins’ recommendation. Moore abstained from the vote. No further explanation for Coleman’s termination was given after the closed-door session.