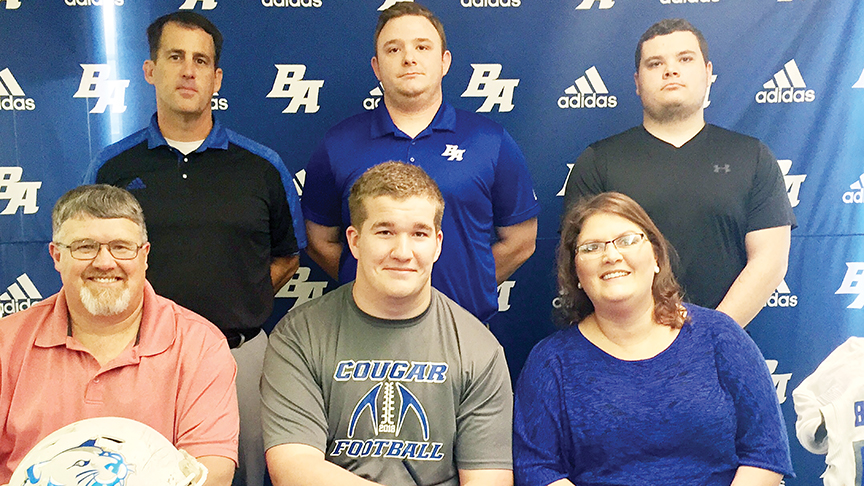 Noah Diamond knows he’s come a long way in his football career. From a reluctant participant when he was younger, to a Brookhaven Academy Cougar as a senior, Diamond took the next step on Wednesday when he signed a letter-of-intent with the Pearl River Community College Wildcats.

“This has always been my dream,” said Diamond. “Once I fell in love with the game, I knew I wanted to play in college.”

Diamond says he wasn’t always gung-ho about any type of physical activity. In elementary he was more worried about playing his Nintendo Game Cube than he was playing outside.

“I was a couch potato when I was younger,” said Diamond. “I didn’t want to be outside or doing anything that involved sweat or work, but luckily I had an uncle that introduced me to football.”

Diamond’s uncle is Wade Boyte, an Enterprise alum who signed with Southern Miss after his high school career. Boyte is an Enterprise assistant coach and used football to get his nephew off the couch and moving.

The 6-foot-4, 320-pound Diamond transferred to Brookhaven Academy as a senior after previously playing for Enterprise. He’s the first BA senior to sign with a JUCO football program since Chandler Rogers inked with Copiah-Lincoln in 2011.

When BA coach Ron Rushing first summoned Diamond to the fieldhouse to talk to a college assistant coach, he wasn’t even sure who he was meeting with.

“I went down to the fieldhouse thinking that Hinds wanted to talk to me,” said Diamond. “I got there and realized it was Pearl River. Coach Rushing had shown them some of my senior film and they were impressed. “

Pearl River finished 2-7 last season under the direction of head coach Ted Egger. Egger went 5-4 the previous season while serving as the interim coach. Those results were good enough for PRCC to give him the job full time.

“The coaches have told me to take a picture of what I look like now, because they plan on transforming me into a better version in the weight room,” said Diamond.

Diamond says the coaching staff at PRCC sees him as a guard at their level. One thing he’s thankful for is the time spent pass-blocking at BA.

“I’ve never gotten a chance to pass-block like I did this year,” said Diamond. “I’ve learned a lot and I want to keep learning and improving when I get to Poplarville.”