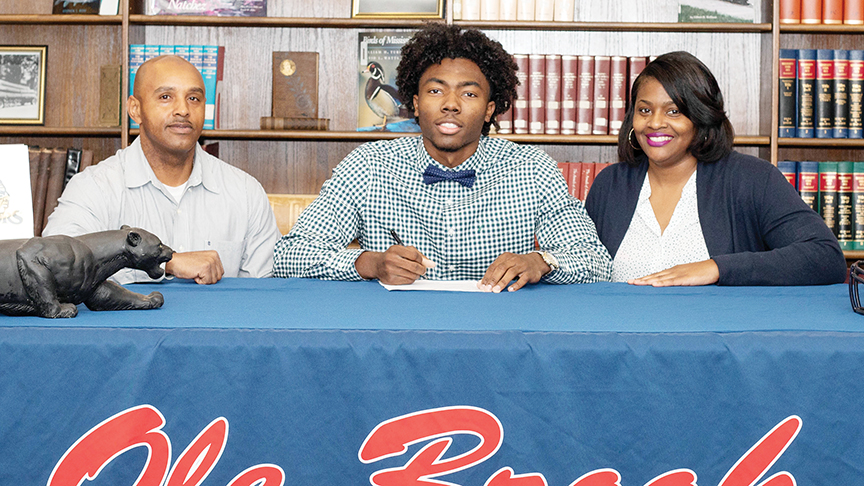 There was never any doubt that John Hilbert was going to play junior college football. He led the Brookhaven High School Panthers in receptions as a sophomore, junior and senior. On Wednesday Hilbert felt a weight lifted off his shoulders when he signed a letter-of-intent with the East Central Community College Warriors.

“I feel grateful,” said Hilbert. “Grateful for the opportunity and thankful for the people who helped me get to this point.”

Hilbert received an offer from Mississippi Gulf Coast early in his senior season. He started to really hear from East Central around the time he was selected as a participant for the Bernard Blackwell North/South All-Star game.

As a senior the 6-foot-2, 185-pound Hilbert caught 57 passes for 826 yards and nine touchdowns. He averaged 14.5 yards per catch and ended his career at BHS with 112 career catches. He was a MAC 5A All-State selection as a senior.

Hilbert is currently averaging 6.8 points and 6.0 rebounds per game for the 19-5 BHS basketball team.

While Hilbert didn’t know a lot about Decatur or East Central, going on a visit showed him where he’s going isn’t much different than where he’s from.

“I like the school and the town,” said Hilbert. “It feels like Brookhaven in that everyone knows each other, and they support the school.”

East Central finished 4-5 in 2018 and nearly pulled off the upset of the year before falling 24-21 to No. 1 East Mississippi. It was the closest any MACJC school came to beating the national champion Lions.

“They like how physical I am,” said Hilbert. “The coaches have really stressed they want me to come in and be a leader, even as a freshman. They believe in me and that feels good.”

On Wednesday head coach Ken Karcher and his staff signed two quarterbacks in Holman Edwards (French Camp Academy) and Deont’e Yarbrough (Louisville High School). The Warriors lose their top quarterback and running back from 2018 to graduation.

Karcher has been at East Central for six seasons. He has previously been offensive coordinator at Eastern Michigan University and head coach at Liberty University. Devin Fosselman — a Wilkinson County graduate who played wideout at Mississippi State, Pearl River, and Jackson State — works as the EC wide receiver coach.

“I feel like the coaching staff really cares about you as an individual, not just as a player,” said Hilbert. “I’m excited to get there and get to work.