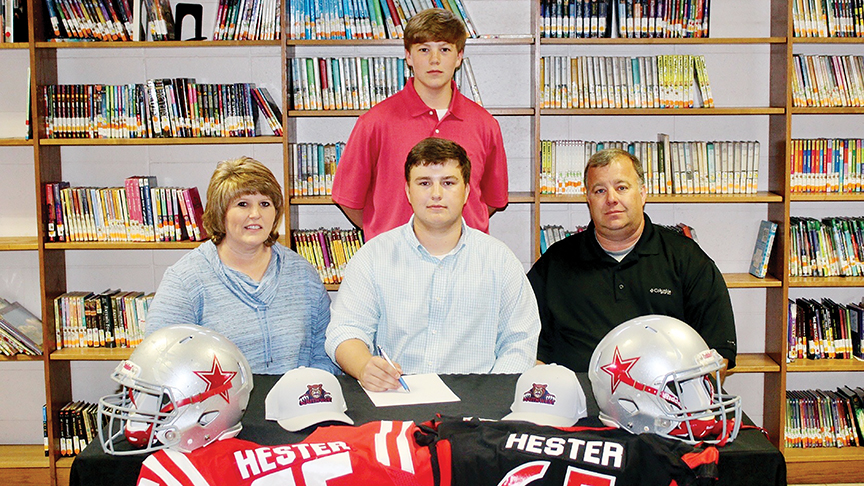 Hester says the Bears saw a skill in his game that their offense requires — a center who is comfortable snapping to a quarterback that is not lined up in shotgun. The Loyd Star Hornets operate out of the I-Formation and that will serve Hester well as he hopes to come in and help the Bears run the ball.

Southwest head coach Tim Stowers wasn’t hired until April of last year and his inaugural Bear team finished 1-8. Stowers is a master teacher of the triple option offense and won a National Championship at Georgia Southern running the scheme. Hester says the coaching staff sees his ability to get out to the second level as a blocker as one of his biggest strengths.

“Coach Stowers and Coach Matt Wannebo started recruiting after the season and they’ve kept in touch and let me know that I’m someone they wanted to sign,” said Hester. “They like how I fire off the ball.”

The 5-foot-10, 270-pound Hester was part of a Hornet offensive line that paved the way for 3,292 rushing yards and 43 touchdowns via the ground in 2018. He was a two-time MAC 2A All-State Selection and Most Valuable Offensive Lineman for Region 7-2A as a senior.

Loyd Star and coach Brian Ford went from 4-7 in Hester’s junior season to 7-4 his senior season. The Hornets were division champs as Hester played on both sides of the line. He says Southwest could see him playing guard along with center in college.

“Coach Stowers says the goal is to have the type of drives that eat up a whole quarter before scoring a touchdown to cap it off,” said Hester. “They want to be the best running team in the state.”

“I’ve got to get stronger, I know how tough the league is, but I’m going to work so I can come in and contribute right away,” said Hester.

For Hester, the signing was the realization of a lifelong goal.

“This is a very, very big moment for me,” said Hester. “I’ve always wanted to play college football and it’s a dream come true to for it to happen.”