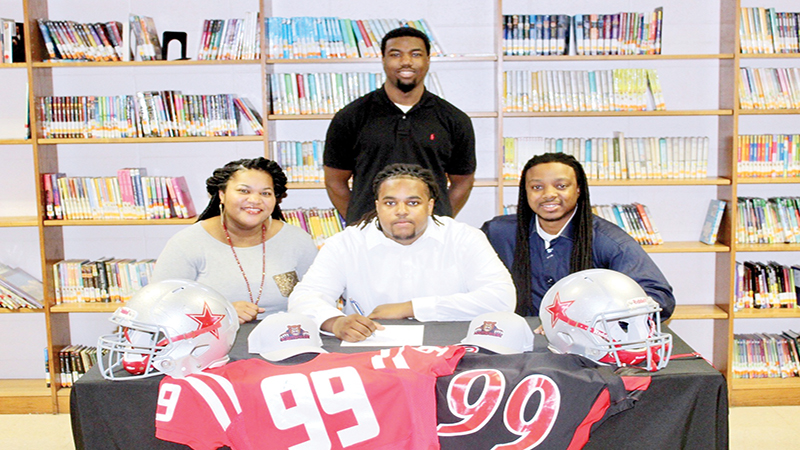 Midway through his senior season Loyd Star senior Zabien Price realized that college football might be part of his future. His team had turned around a 4-7 record from his junior year to a 7-4 record in 2018. He was playing well on both sides of the ball and thought he might start hearing from schools because of that.

Price was right and on Wednesday he signed a letter-of-intent with the Southwest Mississippi Community College Bears.

Playing a defensive end, Price made 40 tackles for his team in 2018. He was also a weapon as a tight end as he caught 15 passes for 225 yards and two scores. At 6-foot-2, 255-pounds and with a wide shouldered frame, one can see Price bulking up and becoming a defensive tackle on the next level.

“The coaches at Southwest said they like how physical I am,” said Price. “My first offer was from Coahoma, but when Southwest started recruiting me I decided I’d rather stay closer to home.”

Coahoma knew about Price after his brother, Patrick, signed with the Tigers last season. Patrick Price, a running back, redshirted last season at Coahoma.

“Rials is a good teammate,” said Price. “We’re pretty tight and we both started looking at the Southwest program together.”

Southwest had a pair of Lincoln County natives on their defensive line in 2018 in Dehauntre Hill and Michael Stallings, both Brookhaven High graduates.

Price wants to major in business and become an entrepreneur, maybe owning a plumbing business one day.

The region championship winning season saw Price and his senior teammates going out on a high note. He’d always believed their time would eventually come.

“We’d all been playing together since pee-wee,” said Price. “I knew that we’d eventually break through.”

Price is also part of a region championship team on the hardwood as he is currently averaging 8.8 points and 4.9 rebounds per game for the 16-7 Loyd Star basketball team that will be the No. 1 seed in the Region 7-2A tournament next week.

Zebo as he’s known by everyone in Hornetville wants to get stronger before he takes the field next season in the loaded MACJC.

“I know I need to tone up and keep lifting before I start school,” said Price. “I’ve wanted to play college football since I was a little kid, since I first started playing pee-wee so this is a great feeling.”