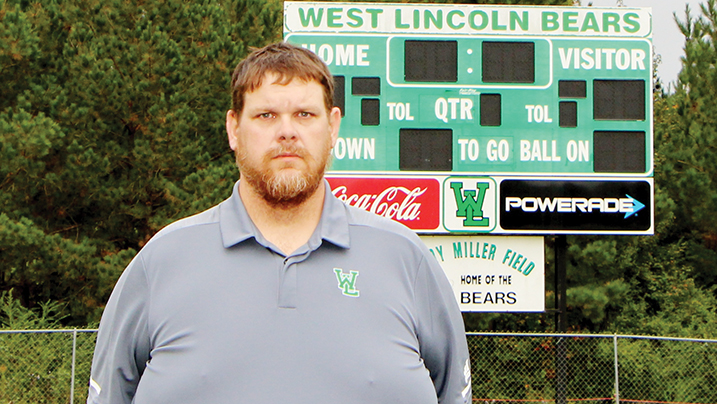 Photo submitted Brad Bland was named West Lincoln head football coach on Monday in a press conference at the school. Bland takes over from B.J. Smithhart who was named head coach at Franklin County last month. Bland has been the defensive coordinator for the last two seasons at West Lincoln.

West Lincoln Attendance Center principal John Shows announced the selection of Brad Bland as the next head football coach for the Bear football team in a press conference at the school on Monday afternoon.

Bland was previously the defensive coordinator for two seasons at WL while coaching both sides of the line.

A native of Copiah County, Bland played at Wesson Attendance Center and Copiah-Lincoln Community College. A graduate of the University of Southern Mississippi, he began his coaching career at Winona High School for six years and coached both sides of the line. In 2010 Winona made the MHSAA 3A south state championship game.

Bland replaces B.J. Smithhart who took the Franklin County High School job last month. Smithhart says West Lincoln is getting a hard worker who cares about the young men entrusted to him.

The West Lincoln program one is that is looking for stability. The Bears began playing football in 1998 and there has not been a coach that has led the team for longer than four years since that time. Brooks Burns and Chris Calcote both coached WL for four seasons. Willie Brumfield coached the team twice — one year the first time and three years the second stint. There have been seven coaches in program history that have led the green and white for two or less seasons.

Shows was making his third hire since becoming principal. Former head coach Justin Sawyer passed away before coaching a game for the Bears. He was replaced by Smithhart. Shows said over 40 people applied for the job this time.

“We feel like coach Bland is the best fit of all the applicants,” said Shows.

That amount of returning talent has the new head coach looking forward to the 2019 season.

“I’m excited,” said Bland. “I feel very confident about this team. We played last season with a bunch of young kids that had to step up after some injuries hit us early. I’m excited to see what we can do.”

Bland says he’ll most likely direct the offense and hire a defensive coordinator to replace him. With Price and Brothern both rushing for over 1,000 yards next season behind a powerful line, Bland said there won’t be a lot of mystery to what the Bears want to accomplish on offense.

“We’ll do similar things to how they’ve been done on offense,” said Bland. “We’ve got a couple good running backs coming back and we’re going to have to develop our passing game to loosen teams up. There is a great core of kids returning for us next season.”