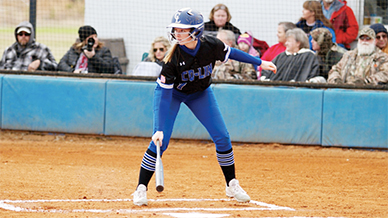 Photo by Co-Lin Sports Information Copiah-Lincoln sophomore outfielder Callie Fortenberry digs in at the plate against Holmes. The 4-0 Lady Wolves travel to Summit Wednesday for games against Southwest and LSU-Eunice.

The Copiah-Lincoln Community College Lady Wolves moved to 4-0 on the year after racking up 26 hits and 21 runs in two wins over Holmes Community College, 8-1 and 13-1. The Lady Wolves blasted three home runs from three separate players and played fantastic defense in the field as the team only committed one error on the day. The Lady Wolves are back in action Wednesday as Co-Lin travels to Summit to face Southwest for game one of the Coca-Cola Challenge at 3 p.m. followed by a contest with No. 3 LSU Eunice at 5 p.m.

Hannah Walls, Harmoni Ashley and Julie Scheuermann all led the Lady Wolves with two RBIs and two hits at the plate. Mackenzie Gros got the start and the win from the circle after throwing a complete game. The win moved Gros to 2-0 on the year. The sophomore gave up one run on seven hits with seven strikeouts and no walks.

Tori Pettit led the way at the plate with four RBIs. Marley Poole finished with three RBIs and a homer, while Walls posted three RBIs on two doubles. Kaytlon Ward moved to 2-0 on the year after getting the start and throwing four innings. Ward fanned three Lady Bulldogs, gave up four hits, one run, but had no earned runs. Amber Brinson closed the game out in the circle. The freshman gave up no runs and one hit.