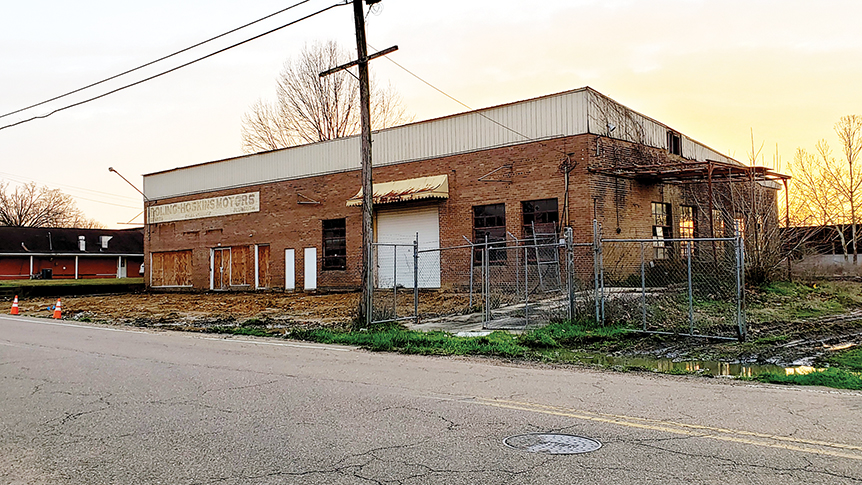 Photo by Donna Campbell The former Boling-Hoskins Motors building on North First Street will be the new site of Brookhaven Fire Station No. 2, which is currently on Willard Street.

Work on Fire Station No. 2, to replace the aging Willard Street station, could begin as early as April.

Brookhaven aldermen voted 5-0 at a Tuesday afternoon special-called meeting to advertise for bids for a contractor to begin construction. Ward 2 Alderman Shannon Moore and Ward 3 Alderwoman Mary Wilson did not attend the meeting.

“We’re just a few days away from putting the final touches (on the blueprints) and we’re ready to bid,” said Ryan Holmes of Dungan Engineering.

Holmes expects to advertise for bids in the next 10 days with a bid opening by late March or early April.

Fire Chief Tony Weeks, Mayor Joe Cox and the former administration had pitched the city’s need to replace Fire Station 2 to different sources since 2014. The current station — a metal building constructed in the 1970s — has suffered a series of maintenance issues over the years. When the project was first proposed, Weeks recommended the new station be built larger than the existing facility. He said city fire trucks are barely able to fit into the current structure’s bays.

Sen. Sally Doty and Reps. Becky Currie and Vince Mangold, all Republican lawmakers from Brookhaven, voted in favor of a multi-million-dollar bond bill in April 2016, $625,000 of which was designated for a fire station. The money has remained in the city’s general fund, drawing interest at a standard rate. The fire station is expected to cost $850,000.

In September, aldermen voted 4-1 to purchase property at 222 North First St. for the new fire station at a cost of $92,500, $1,500 below the appraised value. Wilson and Ward 6 Alderwoman Shelley Harrigill were absent. Moore was the lone vote against the purchase.

The current station on Willard Street sits on the edge of Ward 1, directly adjacent to Ward 2, and serves the eastern portion of the city. Although the new station will be in Moore’s ward, he wanted to see it located farther east, especially for residents in the annexed areas, he said in September.

“I do not agree with spending taxpayers’ money for an old building when the city could have purchased land and built a fire station from the ground up,” he said. “It is important that the city of Brookhaven be good stewards of taxpayers’ money.”

The new station will be built in an existing structure on the North First Street site. The architect has designed plans that will showcase the history of the building, which last housed Boling-Hoskins Motors.

Exposed wood beams and brick will be kept to bring out the old elements of the building and preserve it, Holmes said.

“Basically, it will be a brand new building on the inside. We’re trying to maintain the history of the building externally,” Cox said. “We could have gone out and built a concrete block building with a metal roof and metal sides, but we chose to go this route and maintain something, as far as the history.”

The station will be larger than the current firehouse with two drive-through bays so trucks can enter on North First Street and exit from behind the building. There will be additional parking areas inside the building for smaller trucks.

The plans include a kitchen, bedrooms, three bathrooms, conference room, office, day room, workout area and laundry room as well as a covered area for grilling outside. The bays will be made of 8-inch concrete slabs with a drain for washing the trucks and a carbon monoxide detector, just one of the safety requirements that are included in the plans.

“It’s got room for today’s needs and room for growth,” Holmes said.