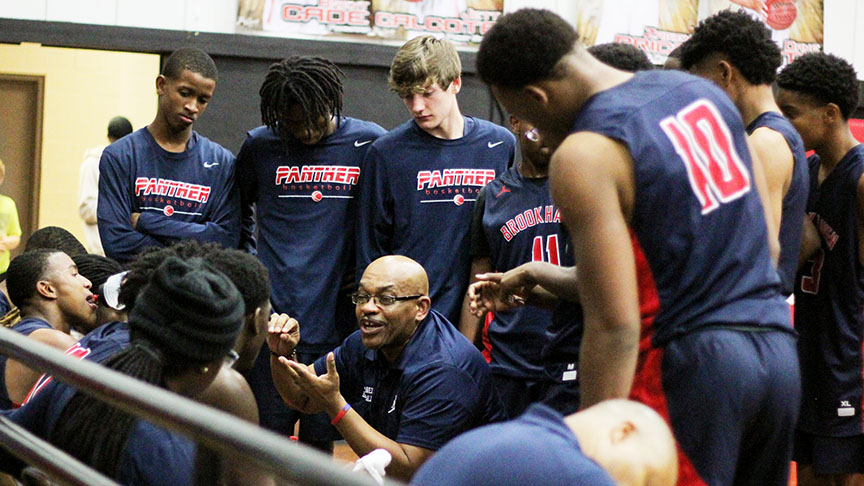 Photo by Becky Green Coach Marcus Flippin and his Brookhaven High Panthers move on to the region championship game against Forest Hill on Friday after blowing out Wingfield 81-64 in the opening round on Tuesday. The Lady Panthers play Forest Hill in the girls’ championship on Friday at 7 p.m. followed by the BHS boys against FH. Wingfield is hosting the tournament.

The Brookhaven High Panthers took home two wins on Tuesday in the Division 6-5A Tournament at Wingfield. In the girls’ game the Lady Panthers (25-1) continued domination of their division mates with a 67-30 pounding of the Natchez High Lady Bulldogs. In the boy’s game the Panthers (20-6) raced out to a 23-9 first quarter lead and never looked back to take an 81-64 win over the homestanding Wingfield Falcons.

Lady Panther pressure too much for NHS

As has been the case all season, the Lady Panthers used their suffocating pressure defense to set the tone in their victory. And also, as per usual — it was junior forward Silentianna Collins leading the BHS offense as she scored a game high 17 points. Collins grabbed four rebounds, made four steals, and dished out five assists as BHS led 16-4 after the first quarter and 29-13 at halftime.

Coach Preston Wilson and his team now move on to a 7 p.m. matchup on Friday with the Forest Hill Lady Patriots in the championship game. BHS beat FH 51-50 in Jackson and 52-40 in Brookhaven during the regular season.

Panthers whip Falcons in their own nest

In what may have looked like a close game on paper turned into a blowout as the Panthers locked up a playoff appearance in season two under head coach Marcus Flippin.

BHS had lost 77-75 at Wingfield on Jan. 18 and then beat the Falcons 57-53 last Tuesday in Sinclair Gymnasium. In the third matchup between the teams it was BHS senior guard Lafollette Bogan who made sure his squad moved on to the tournament finals. Bogan scored 34 points by shooting 71 percent from the floor to lead the Panther offense.

BHS moves on to face Forest Hill on Friday at 8:30 p.m. in the finals. The Panthers split their regular season matchup with Forest Hill and were the only team in the region to beat the Patriots. Forest Hill had a much closer than expected win in the semifinals when they beat Natchez 57-52 in overtime. Natchez had not won a region game during the regular season before taking the Patriots to OT Tuesday night.