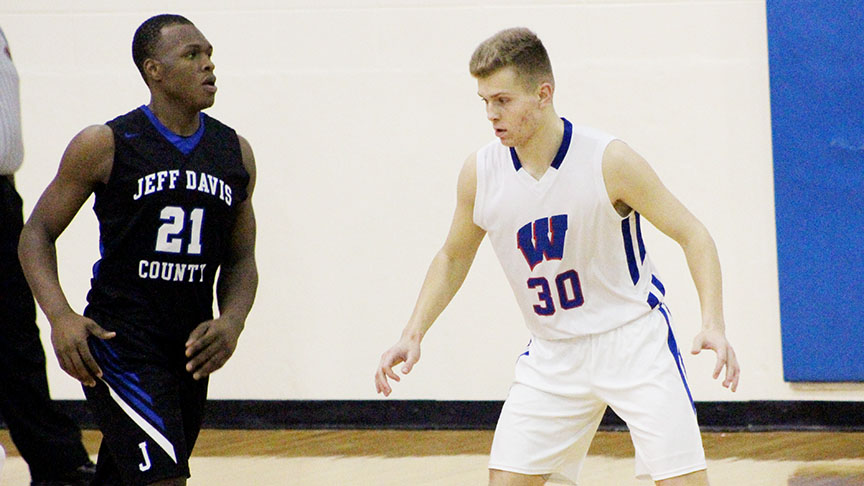 Photo by Cliff Furr Wesson junior forward Kenner Bizot hit a late 3-pointer that sent the game to overtime, but the Cobras would see Jefferson Davis County take a 65-62 win in the opening round of the region tournament Tuesday night. It was the final 3A game for at least two years as Wesson now moves down to join the local 2A region beginning next season.

The Wesson Cobras saw their basketball season come to an end in the opening round of the Region 8-3A tournament Tuesday night on their home court. Columbia High jumped to an early lead and cruised to a 63-42 win over the Lady Cobras (2-27) in the opening game of the day. In the finale the Cobras (19-10) and Jefferson Davis County Jaguars needed overtime to decided who would move on to the semifinals. In the end it was JDC who edged out Wesson by a final score of 65-62.

Lady Cobras move on to year two under Nunnery

The Wesson offense struggled against the Lady Wildcats defense throughout the game, as they couldn’t get their shots to fall. Forced to play from behind, the Lady Cobras would rally in the second quarter to maintain a chance at staying in the game.

The Lady Cobras would not be able to close the gap much closer than that as Columbia controlled the pace in the second half to send themselves on to the semifinals where they’ll meet the Jefferson Davis County Lady today at 7 p.m.

Looking to the offseason Lady Cobras coach Michelle Nunnery feels like her team needs to grow in maturity and shooting ability as they move down to Region 7-2A after spending the last six seasons as a member of the 3A classification.

“We need to get more confident with our shots,” said Nunnery. “When we move to Region 7-2A we’ll have to be able to compete against teams like Loyd Star and West Lincoln. Both are very good shooting teams. We’re losing five seniors and they all got a good bit of playing time throughout the season. The underclassmen will need to step up and fill the shoes of the seniors we’re losing.”

The boys’ game was a physical game that saw ties and lead changes throughout the contest. Both teams had a chance to end the game in regulation, but it would take overtime for one team to emerge as the victor.

Jefferson Davis County led 13-9 at the end of the first quarter before Wesson came back to tie things at 21-21 at halftime.

The game remained tight through the final 16 minutes of action. Trailing 56-53, Wesson would get a Kenner Bizot 3-pointer to tie the game and send it into overtime.

Jefferson Davis would control the tempo in overtime as they held on for the victory. Wesson had beaten JDC 65-55 on their home court on Jan. 15. The Jaguars got revenge on Feb. 1 when they beat Wesson 65-64 in overtime in Bassfield.

It’s been a season of heartbreaking losses as Wesson wraps up their final season in Region 8-3A before moving down to join Region 7-2A with Amite County, Bogue Chitto, Enterprise, Loyd Star, and West Lincoln.

Not including the loss Tuesday night, Wesson head coach Rusty Newman and his team dropped five division games this season by five points or less.

“Tonight was a good high school game,” said Newman. “It was very physical. It was everything a region tournament game should be. We had the opportunities to end the game in regulation but just couldn’t make the plays. I’m extremely proud of the guys for not quitting.”

Jefferson Davis County moves on to play top seeded Tylertown tonight at 5:30 p.m. in the semifinals.