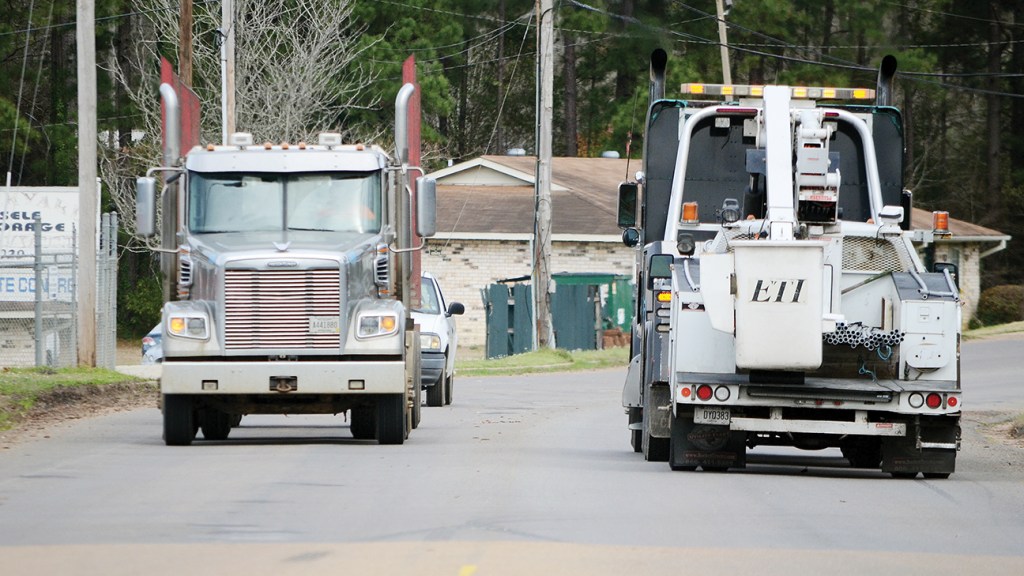 Photo by Luke Horton/Trucks traveling from I-55 to Industrial Park Road have created wear and tear along the way, prompting the Brookhaven Board of Aldermen to approve a project that would resurface Union Street Extension and Industrial Park Road to Hwy. 51 using oil spill settlement funds.

Brookhaven aldermen plan to take their half-million in BP funds and pour it into repaving part of Union Street Extension and Industrial Park Road.

The Board of Aldermen voted 5-0 earlier this week for Dungan Engineering to begin design plans for a proposed improvement project that will begin near Rebel Tester’s Inc. on Union Street Extension where the four-lane, state-aid highway narrows to the two-lane, city-owned road. The project will have contractors turn at Industrial Park Road and run the length of it to Hwy. 51 North, stopping at the intersection.

The project will cost an estimated $500,000, said engineer Ryan Holmes with Dungan Engineering.

The city and county are set to receive $500,000 each after state lawmakers in August handed out $111 million in funding across the state, with $61 million coming from the state’s BP oil spill settlement and $50 million borrowed.

Brookhaven Mayor Joe Cox addressed the Lincoln County Board of Supervisors in December, asking the board to consider putting its half-million-dollar check toward the repaving of Industrial Park Road Northeast, the last section of highway between I-55 and the Brookhaven Industrial Park not yet reconditioned after years of abuse by heavy trucks.

Supervisors have not voted on any use for the money.

The project to enhance the industrial park’s connection to the interstate has been going for two years. Supervisors began helping the city resurface Manufacturer’s Boulevard and Industrial Park Road Northeast — parts of both are county-owned and maintained under the Mississippi Office of State Aid Road Construction — in 2016 with a $1.25 million federal grant.

The boulevard in the park has been resurfaced, and so has the section of Industrial Park Road Northeast from the park west to the intersection with North Jackson Street. But from North Jackson Street to I-55 remains untouched and in need of repairs to continue supporting the heavy trucks to and from Walmart Distribution, McLane Co. and other businesses in the park.

“It’s been a long process to get it all done. We’ve had to do it in pieces,” Holmes said. “This is one of the last pieces that hasn’t been touched.”

Ward 6 Alderwoman Shelley Harrigill said she’d like to see the area from Hwy. 51 to North Jackson Street resurfaced as well, but Holmes’ estimate of another $500,000 to add that to the project put her goal out of reach.

“I think the opportunity will arise again for us to get some federal money,” Holmes said. “I just don’t know when that might be. It might be six months. It may be two years.”