Co-Lin Wolves look to be aggressive in 2019 baseball season 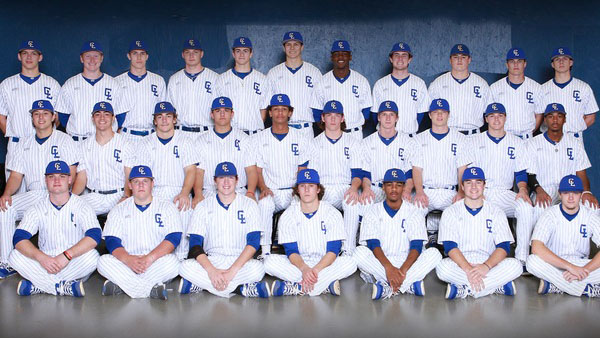 Photo by Co-Lin Sports Information Pictured are the members of the 2019 Copiah-Lincoln Wolves baseball team.

The Copiah-Lincoln Community College Wolves are looking for their second playoff run in the last three years as the 2019 team prepares to take the diamond in the spring. The Wolves finished the year 20-21 last year and missed the playoffs, but this year’s squad has their goal set much higher.

“We are always looking to win 30 plus games and have a chance to go compete in the postseason,” said sixth-year head coach Clay Smith. “We have the talent to succeed this year. There are a lot of good teams in our league, but if we play to our ability, and play up in some big games we can be very successful.”

This year’s team is in stark contrast to last year’s as the 2019 squad is packed with 18 freshmen. The young team brings challenges to the Co-Lin coaching staff but also brings fresh energy and excitement.

“It’s definitely a learning curve for these young guys,” said Smith. “The speed of the game is something they have to get used to…they got a taste of it in the fall, but they just need game experience. All of these guys are eager to learn and get on the field, which drives competition for roles in practice. They all listen and are very coachable which will help us.”

Overall the Wolves look very athletic with very little if any holes on the offensive and defensive side of the ball. That athletic ability opens many doors for the Co-Lin coaching staff including aggressiveness. Last year the Wolves were second in the MACJC with 110 stolen bases on 143 attempts. Co-Lin looks to keep that fast-paced pressure up this season.

“We are a very athletic group,” said Smith. “We’ll have to see how it goes as far as power, but everybody can handle the bat and can run. We look to be aggressive on the basepaths and hope to get into scoring position as quickly as possible.”

Ryan Zimmerman leads Co-Lin’s offensive returners in 2019. The sophomore outfielder from Mandeville, Louisiana, provided a powerful bat to the Wolves’ lineup and posted a fielding percentage of 1.000. Zimmerman was second on the team in home runs with six and drove in 27 RBIs last season. He batted .413 in 92 at-bats and stole 21 bases on the year. Zimmerman’s stellar season landed him MACJC Second Team All-State honors, the only freshman to receive post-season accolades last season.

Also returning to the lineup is Mark Hubbard. Hubbard saw action in 18 games and 50 plate appearances as a freshman. He batted .340 with a .443 on-base percentage. He had 12 RBIs and one home run on the season. Hubbard will play catcher and first base and be a leader in the field for the Wolves in 2019.

Austin Tidwell is another good bat returning to the lineup this season and is a Swiss army knife in the field. Tidwell, a sophomore from Calhoun, Louisiana, played in 40 of 41 games and filled several roles in the infield and pitching. This season, Tidwell will split his time between the mound and the outfield. As a freshman, he batted .295 with 28 RBIs and five home runs. He threw 21 innings on the mound and racked up 24 strikeouts and one save.

Thomas Slagle is back for his sophomore season after taking over several roles as a freshman due to injuries last season. Slagle, a Franklin County product from Roxie, can play anywhere on the field but looks to play in the infield in 2019. He batted .282 last season with 17 RBIs and three home runs. Look for Slagle to be another solid player in the heart of Co-Lin’s lineup.

Madison Smith is a role player that can play any spot in the outfield. As a freshman, Smith roped two home runs and seven RBIs through 48 at-bats. Smith, a sophomore from Brookhaven, is a team guy that is willing to step in wherever he is needed.

The Wolves have three pitchers returning this season in Conner Ingram, Zach Smith and Alex Mooney.

Ingram, a right-hander from Hattiesburg, made 11 appearances as a freshman and was 2-2 on the year through 30.1 innings. He posted 22 strikeouts and gave up 39 hits. Ingram has already committed to continuing his baseball career at Spring Hill College and looks to be a main starter for the Wolves.

Smith, another righty from Hattiesburg, looks to be a huge part of Co-Lin’s bullpen this season as he is versatile and can come in at any point of the game. He can get the Wolves out of a jam or can throw as a closer late in a game. As a freshman, Smith made 16 appearances and threw 18.1 innings. He struck out 18 batters gave up 20 runs.

Mooney redshirted as a freshman and has made big strides since last year. The 6’5 sophomore from Wesson will play a role in relief on the mound.

This group of pitchers is different from years past as there is no standout “ace,” which allows the Wolves a lot of options out of the pen and in different game situations.

“We have a lot of guys who have pitchablity,” said Smith. “We are looking for strikes and getting guys out quickly, and these guys are all competing hard for those roles.”

In the field, the Wolves look to be solid with several key players returning in Slagle in the infield and Zimmerman in the outfield. The Wolves fielded the ball pretty well last year at .934, but that is a number coach Clay Smith hopes to improve on.

“We are going to be really good in the field,” said Smith. “We are very young, but the majority of those freshmen are pitchers … if we can make the routine plays we’ll be in good shape. Our goal is to field over .950 which is definitely achievable with this group of guys.”

Joining the Wolves in the field are a number of freshmen who look to immediately make an impact on the field including Kevin Wright of Madison, Clint Stephens of Bogue Chitto, Brooks Italiano of Ridgeland, Trey Frierson of Canton, Houston Mims of Columbus, Justin Johnson of Brandon, Landry McQueen of Collins, Zach Joyner of Little Rock, and Kylar Fielder of Bogue Chitto.

Nine players off of last year’s squad signed with four-year programs. A trio of Wolves, Hayden White, Christian Day and CJ Estave, will suit up at Delta State University, Justin Hutton and Jordan Bowden will play for Arkansas Monticello, Jaylyn Williams and Chandler Dillard will play for Jackson State University and Blake Sigrest and Tyler Etheridge will team up at Blue Mountain College.

Coach Smith is joined this year by assistant coach and pitching coach Bryan Nobile. This is Nobile’s 15th season with the Wolves. He also serves as the college’s Athletic Director and Assistant Dean of Students. Jack Edmonson returns as an assistant coach for his third year, and new to the team this season is assistant coach Tanner Wessling.

“Our team chemistry is definitely the biggest strength of this team,” said coach Smith. “They all get along and work extremely hard…whether it equates to wins is yet to be seen, but there is nothing that can replace their work ethic and chemistry.”

The Wolves have a solid squad through and through and look to be aggressive in every aspect of the game. Combine this raw talent with team chemistry and a bond that only builds each other and demands the best of each player and Co-Lin is prone to make an MACJC playoff run in 2019.