Hornets get region redemption with win over West Lincoln 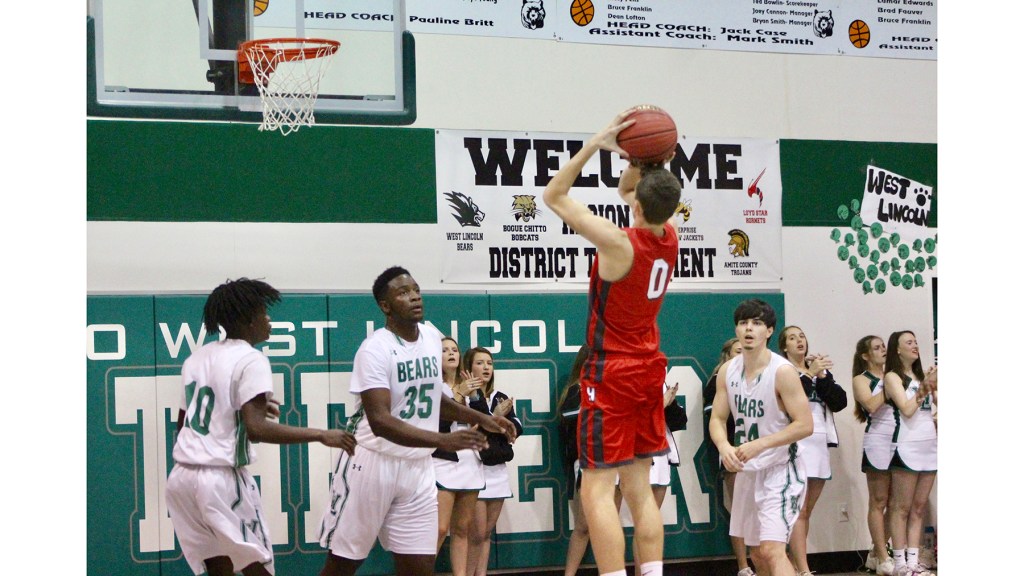 Photo by Cliff Furr Loyd Star guard Stephen Mills stops to pop a jumper in front of the defense of Keshon Byrd (No. 35) of West Lincoln Friday night in the finals of the Region 7-2A Tournament.. Mills and the region champion Hornets will host St. Patrick on Tuesday. West Lincoln plays host to Richton on Tuesday in the opening round of the MHSAA 2A State Tournament

Last season the Loyd Star Hornets came into the region tournament as the No. 1 seed. Two losses later they ended the event as the fourth-place team. Senior guard Dane Smith says his team got a measure of redemption on Friday night when the Hornets beat West Lincoln 71-59 in the Region 7-2A championship.

“This feels good after what happened with us last year,” said Smith as he was surrounded by well-wishers and friends after the game.

West Lincoln (15-12) beat Loyd Star (19-9) 63-54 when the two teams met on Dec. 4 in the county tournament. The next meeting was at West Lincoln and saw the Hornets win 62-59. WL leading scorer Karlton Byrd was sidelined for that matchup with an ankle injury. In their final regular season matchup LS edged out the Bears 59-57.

Smith was named Region 7-2A Most Valuable Player after the game and he looked like nothing less on his way to scoring a game-high 30 points Friday night.

Loyd Star jumped up 18-13 after the first quarter. West Lincoln hosting the tournament on their home court didn’t happen until a week before. The event was originally to be hosted by Amite County, but the court at ACHS was deemed to be unplayable.
West Lincoln is a team that can get hot from behind the 3-point line, especially in Jack Case Gymnasium. However, on Friday the Bear bombers never got cooking.

In the second quarter a Jett Calcote layup capped a quick 6-0 run that put Loyd Star up 26-18 and forced WL coach Brooks Smith to call a timeout with 5:31 remaining until halftime.

Calcote was a key to the Hornet offense as his drives to the basket proved to be problematic for West Lincoln to stop. Calcote scored 22 points with 10 coming in the first half. Loyd Star led 33-27 at halftime.
The pace was too fast at times and play became sloppy in the third quarter. Both teams were using the dribble to try and get the ball to the basket and that led to turnovers piling up as both teams had moments of chaos.

Loyd Star led 47-40 after the third quarter and the plan for each coach was completely different in the final eight minutes of the game.
Smith was imploring his team to — “let’s go” — every time the Bears corralled a defensive rebound. Loyd Star coach Seth Britt on the other hand was telling his troops to — “slow it down” — whenever they crossed half court.

With 5:48 remaining in the game a Michael Brothern layup cut the LS lead to 49-46. The basket came after a steal and assist by Karlton Byrd.

Britt would put his team in a full-court pressure that caused a Bear turnover. Senior forward Zabien Price scored a layup for the Hornets over WL junior forward Keshon Byrd. Byrd, the largest inside presence in the region, was limited all night by foul trouble before picking up his fifth personal with two minutes remaining.

After his basket Price forced a turnover on the press by crowding Brothern and causing a travel. West Lincoln would never get closer as Loyd Star used run-outs on easy layups to grow the lead late.

“We really controlled the tempo,” said Britt. “It’s not easy to beat West Lincoln at Flea Hop and our kids had to fight until the end.”

Loyd Star has improved throughout season

Britt took over this season for long time Hornet leader Gene “Moochie” Britt. The team began the season 4-0 but were 8-7 at the Christmas break. Since the holiday season the Hornets are 11-2. Britt says a 71-68 overtime loss at home to Pisgah on Dec. 21 was a turning point for his team.
“The guys really bought into the region portion of our schedule being a whole new season,” said Britt. “They were frustrated with how we ended the first semester and made up their mind to put in the work to get better.”

Smith agrees with his coach that the team began to gel after taking some lumps early on.

“Wesson beat us pretty bad at our place and after that we started to really come together,” said Smith. “We’ve got plenty of senior leadership on this team, it was just about everyone accepting their role and doing what’s best for the team.”

“Give Loyd Star credit, they earned this,” said Brooks Smith. “I’m glad to see Dane Smith graduate. He’s always kept us on our toes. We missed way too many layups and free throws.”

In the Region 7-2A consolation game on Friday the Amite County Trojans beat Bogue Chitto 59-38. The Bobcats (7-22) play on the road Tuesday night when they travel to Eatonville to play North Forrest (22-4). West Lincoln will host Richton on Tuesday. Loyd Star will host St. Patrick (21-7) in an opening round playoff game on Tuesday. Richton upset St. Patrick in the consolation game of the Region 8-2A tournament 68-59. St. Patrick had previously handily beat Richton in their two regular season meetings. Second round playoff games will take place on Saturday.