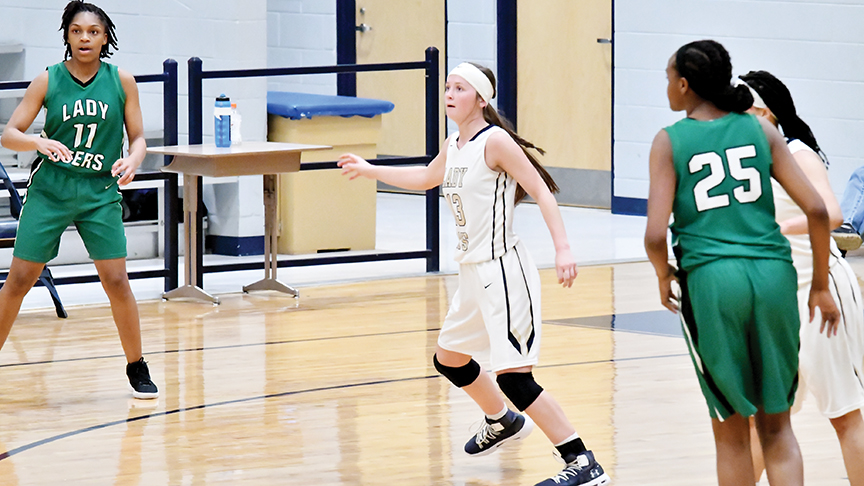 Photo by Stacy Leake Bogue Chitto senior guard Karly Leake plays defense against the Collins Lady Tigers in the opening round of the MHSAA 2A State Tournament. Bogue Chitto whipped Collins 49-15 on Monday and moves on to play at Bay Springs on Friday.

Hosting the first round of the MHSAA 2A State Tournament on Monday night, the Bogue Chitto Lady Bobcats (20-9) took the Collins Lady Tigers to school as they dominated on their way to a 49-15 victory.

The Lady Bobcats’ plan for the game was simple. Keep the ball out of the hands of Collins’ inside threats — Raneisha Magee and La’Angel Wheeler. Magee stands at 6-foot-1 and leads the Lady Tigers in scoring. Wheeler is a near 6-foot freshman.

The Lady Bobcats executed their game plan all game long, forcing the Lady Tigers to go for outside shots, something that Collins struggled with all game.

“Tonight, we played a really good team-ballgame,” Lady Bobcats senior Cheyenne Hall said. “Our defense was there. We were a little shaky in the first quarter on offense, but I think we played really good and it was great to get a first-round win.”

The Lady Bobcats wasted no time in setting the pace of the game, as they quickly jumped out in front of the Lady Tigers.

The BC defense pressured the Lady Tigers and never let them feel comfortable shooting the ball.

Taking advantage of the turnovers the defense caused, the Lady Bobcats fed Kamilah Clay inside as she put BC up 12-0 at the end of the first quarter.

“We’ve played hard all year,” said senior Karly Leake. “We’re like a family and want to continue to play together. It was good to get our 20th win of the season tonight too.”

The win was the first as a 2A team for the Lady Bobcats after making the move up from 1A last season.

The Lady Bobcats offense struggled in the opening minutes of the second quarter, as they watched their shots miss the mark.

Grabbing her own rebound, Clay ended a scoring drought and put her team up 17-0 in the quarter.

Collins would finally get on the board later in the quarter but trailed 24-4 at halftime.

“It was nice to secure our 20th win of the season and do it at home,” Lady Bobcats senior Charlsie Wilson said. “Our team has grown since day one in June to where we are  now.”

Coming out of halftime, the Lady Bobcats continued their inside attack, this time giving the ball to Katelynn Palmer.

The Lady Tigers soon were able to snuff out the post attack and forced the Lady Bobcats to take outside shots.

The Lady Bobcats showed that they weren’t afraid to shoot the ball from deep though as they knocked down shots to take a 40-8 lead into the final quarter.

By the time the final buzzer sounded, every Lady Bobcat had a chance to get into the game and get some playing time.

“I’m proud of the girls and their effort tonight,” said Walters. “The younger players got to get into the game and get some playing experience. I’m looking forward to the next round.”

The Lady Bobcats will travel to Bay Springs on Friday for a matchup with the Lady Bulldogs in the second round.