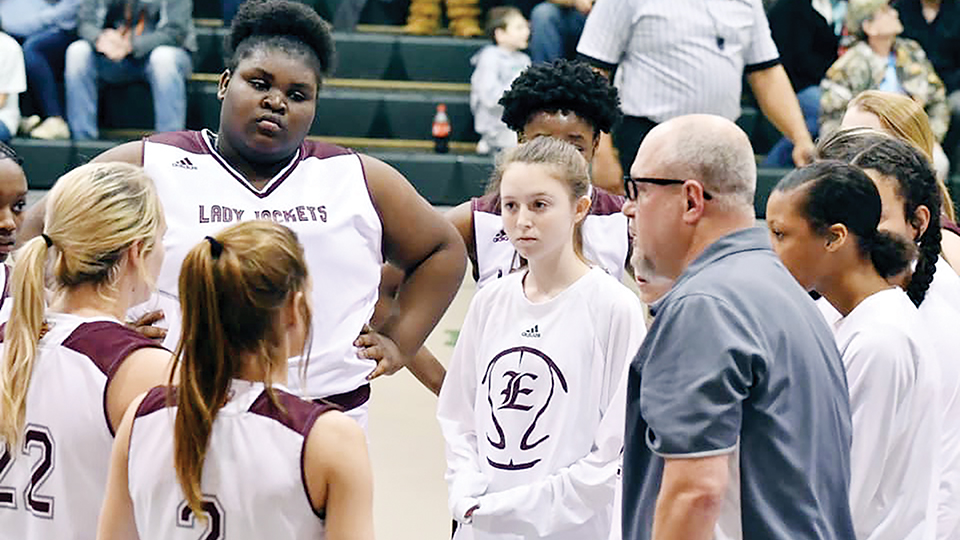 Photo by Stacy Leake Coach Shane Adams and the Enterprise Lady Jackets fell on the road to North Forrest by a 49-20 on Monday. Adams only loses three seniors to graduation off of his team.

The Enterprise Lady Yellow Jackets (7-18) saw their season come to an end on Monday night with a 49-20 playoff road loss at North Forrest High School.

The NFHS Lady Eagles were the No. 1 seed out of Region 8-2A and jumped out to a 14-3 lead on the Lady Jackets after the first quarter. North Forrest led 28-13 at halftime.

The 2A state playoff first round appearance was the first for Enterprise since the 2012-2013 season. Lady Jacket head coach Shane Adams is glad his seniors got to experience the playoffs and hoops it makes his younger players hungry to get back.

“Very proud of the season my girls have had,” said Adams. “We started the season off 0-3 and I don’t think anyone gave them a chance, but they battled and played hard all year. Their effort was really good in both practices and games and we just tried to get better every day at something.”

Due to injuries the Lady Jackets finished the season with two seniors and one junior dressing out. Harris is a freshman and Jergins an eighth grader.

“I’m happy for the seniors to make it this far in their final season,” said Adams. “Hopefully this gives our younger players something to shoot for in the future.”

North Forrest will host Taylorsville in the next round on Friday.