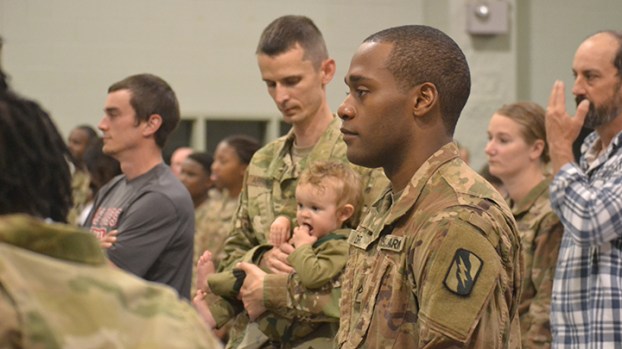 Daily Leader file photo Soldiers with the 106th India Co. Brookhaven unit — as part of the 155th Armored Battalion Co. — are beginning to return home from their deployment in the Middle East.

A Mississippi National Guard unit is coming home from deployment to the Middle East, with the first 300 members of the 155th Armored Brigade Combat Team returning to Mississippi on Monday after leaving this past April.

More than 4,000 guard members deployed to Kuwait to deter and react to threats as part of Operation Spartan Shield, the unit’s third deployment to the Middle East since 2001. More than 3,500 of those soldiers came from the 155th.

Hundreds of family members and friends came out Monday night to Thompson Field, the guard’s air base at the Jackson airport, to meet the first two flights home, carrying gifts, balloons and signs.

It takes about 14 days for soldiers to go through demobilization, and all the unit’s soldiers are expected to be home by late March. The Tupelo-based brigade has units in Monticello, McComb, Senatobia, Starkville, Amory and Meridian, as well as Kansas City, Kansas.

The flights were the first in a series returning brigade soldiers home this spring.

“The city and Lawrence County are looking forward to the return of our troops,” said Monticello Mayor Martha Watts.

Watts said once all of their local soldiers have come home, the city and county will have a formal recognition of their return.

“A couple are home, but they’re not all here and we don’t want to leave anyone out,” said Watts. “We appreciate our troops.”

Dusti Smith, wife of Spec. Dylan Smith — a mechanic with India Co. 106 — said she and other Guard families will start putting out “Welcome Home” signs this weekend around the area, and refresh the yellow ribbons at the Brookhaven armory.

“It’s all small groups coming in,” Smith said. “The Brookhaven unit is not coming in at one time so we can’t have a ‘Welcome Home’ party for everyone yet.”

Smith is looking forward to having her husband back home with her and their son, Easton Burke Smith, who was born while his father was overseas. Spec. Smith was able to come home briefly following Easton’s birth in August.

Dusti Smith said, “Exciting is not even the way to describe it. We’re waiting to find our new normal again.”

Spec. Joshua Byrne is also being eagerly awaited by his wife, Lori, leader of the I Co. 106th Family Readiness Group. Byrne says she and the other volunteers are working with the VFW to hopefully provide a celebratory event for the soldiers and their families in July, once all the troops have returned.

At the group’s deployment, Byrne said “This is a part-time job, but you guys get in it and you do it better than most active duty people can ever get it done.”

“I have no doubt that (they) will return home safely, feeling accomplished,” she said.

Districts have 3 days to clean up; board shortens trash program

It’s time for the Great American Cleanup and Lincoln Countians will have one less day to discard a years’ worth... read more