Irish knock Hornets out of postseason 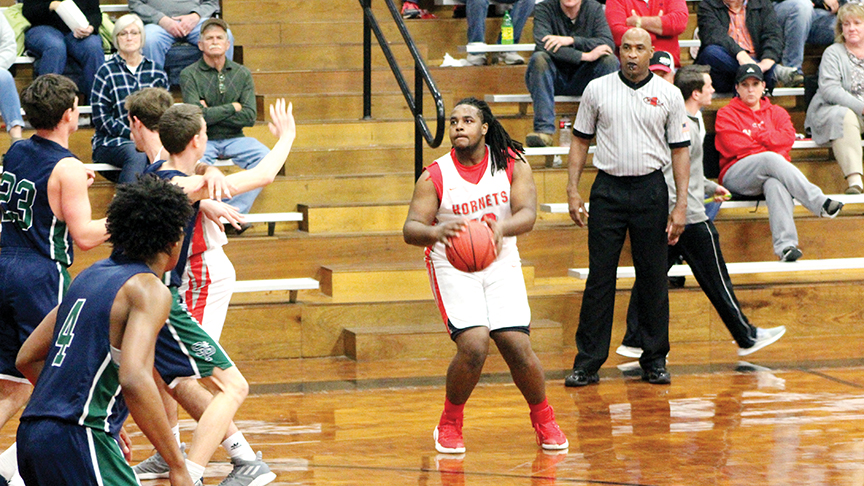 Photo by Cliff Furr Loyd Star senior forward Zabien Price prepares to shoot against the St. Patrick defense on Tuesday night. The Hornets saw their season come to an end after suffering a 57-45 defeat to the Fighting Irish in the opening round of the MHSAA 2A State Tournament.

A 16-5 run over the final four minutes of the first quarter put St. Patrick in control of their playoff matchup with Loyd Star on Tuesday night and the Fighting Irish never let it slip out of their grasp on the way to a 57-45 win.

The Hornets (19-10) were playing on their home court after winning the Region 7-2A tournament on Friday. The Irish (22-6) finished in the No. 4 position last week at the Region 8 tournament, which was an unexpected result. North Forrest finished first in the region but only beat St. Pat by three in the regular season and two in the semifinals of their tournament. Then in the consolation game the Irish lost to a Richton team that they had beaten by 28 and 14 points during the regular season.

Loyd Star led 5-4 in the early going of the first quarter as both teams felt each other out. A quick 7-0 run put the Irish up 12-5 with 2:15 left in the quarter and prompted a timeout by Loyd Star head coach Seth Britt.

St. Patrick led 20-9 at the end of the first quarter. The Irish went up by that score when their lead guard Jay Parker hit a long two with .2 seconds left on the clock. Parker was knocked down by a foul while shooting and nailed his free-throw to put SP up 11 after eight minutes.

The Irish are coached by former Northeast Jones and Pascagoula head coach Keith Robinson. Robinson won a state championship at NEJ in 1994.

Not to sound like a cliché, but the Catholic school boys play a fundamental style of basketball. Defensively they communicate and play a physical man-to-man scheme with pressure on the ball. On offense they play a five-out with cuts and passing to move the ball and knock down open jumpers.

St. Patrick continued to grow their lead in the first half and were up 33-19 at the break.

“They’re a good team, no doubt,” said Britt. “We got behind and kind of lost our way early. Everyone was trying hard to make a play, but sometimes trying too hard can turn into panic.”

A deep 3-pointer by Jett Calcote on the first LS possession of the second half cut the lead to 33-22 and it looked like the Hornets would start chipping away at the lead. That didn’t happen though as SP went on another run that put them up 51-33 going into the fourth.

As the Hornets began to scramble to get back into the game, they played their best basketball of the night. Causing turnovers and playing with urgency on offense, Loyd Star made it a 10-point game at 55-45 with 3:05 remaining when Zabien Price scored on an offensive rebound.

That would be as close as the home team would come though as St. Patrick used their ball handlers to stop the Hornet comeback attempt.

Parker scored a game high 27 points to lead St. Patrick. Windfield Swetman scored 13 points for St. Pat. The Irish finished 15-of-22 from the free throw line. St. Patrick moves on to face Heidelberg in the next round.

First-year head coach Britt is appreciative of everything the group has done for him and the program.

“Even though it didn’t end like we wanted tonight, I’d pick those guys to be on my team every time,” said Britt. “They were a great group for me to get my feet wet with as a senior class. They’re great kids and have been a really fun group to coach this season.”