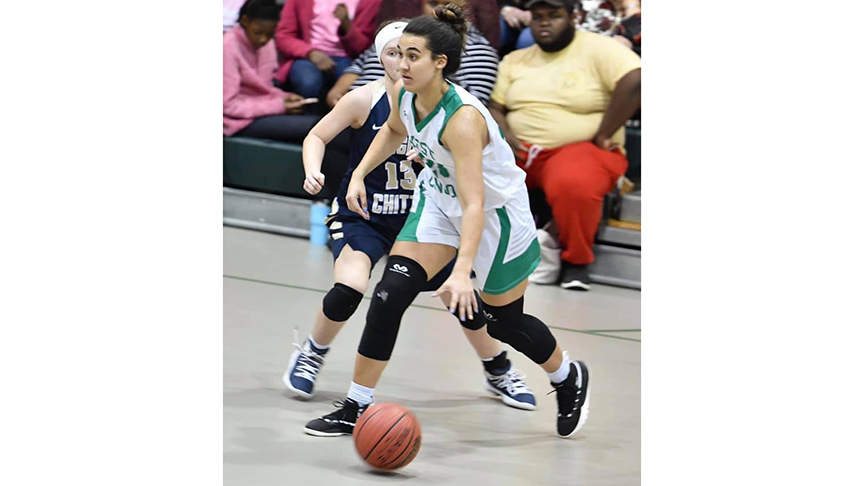 Photo by Stacy Leake Senior guard Megan Gerald handed out 15 assists for the West Lincoln Lady Bears on Tuesday night in their 76-46 win over Richton. The Lady Bears host Enterprise-Clarke on Friday at 7 p.m. in Jack Case Gymnasium.

The West Lincoln Bears took a pair of wins over the visiting Richton Rebels on Tuesday in the opening round of both the girls’ and boys’ MHSAA 2A State Tournament.

“We started a little sluggish, but once we found another gear, everything clicked,” said WL head coach Brooks Smith. “Megan did a great job of finding open teammates and Brittany and Bailey gave us a lift all night. It was good to see Skylar stay aggressive on offense and defense.”

The Lady Bears will now move on to host the Enterprise-Clarke Lady Bulldogs (20-9) on Friday at 7 p.m. The Lady Dogs moved on to the second round after beating Pelahatchie 60-35 on Monday night. West Lincoln beat Pelahatchie 66-26 at home on Jan. 8 but lost 41-34 when they returned the game to Rankin County on Jan. 25.

“Our focus in on Enterprise now,” said Smith. “We’ve got some areas to clean up for us to be successful.”

The boys’ game was different in that the Rebels led 19-13 after the first quarter and 33-30 at halftime before a Bear comeback in the second half.

The Rebels came out and grabbed an early 19-6 lead in a game that saw the two teams combine for 51 fouls. The Bears alone would go 33-of-46 from the free throw line for the night.

Richton relies on the scoring of senior Za’Darius Mitchell and after he scored 12 first quarter points, Smith and his crew made the adjustments to put the breaks on him.

“We held Mitchell to 13 over the last three quarters after his big start,” said Smith. “Enrico Price did a great job of slowing him down.”

“I was proud of the boys for coming back,” said Smith. “Keshon played his best game of the year and Garrison and Karlton were solid at the free throw line in a foul fest.”

Next up for WL is a Saturday trip to Jasper County to face the Bay Springs Bulldogs (26-3). Bay Springs beat Pisgah 91-56 on Tuesday night. The only losses this season for BS came to Northeast Lauderdale, Laurel, and Ingomar. They’re considered to be one of the most athletic teams in 2A as they’ve broken the 90-point plateau twice in their last three games.

Last season the Bulldogs and Bears met in the second round with Bay Springs taking an 80-53 victory. Smith is glad his team now knows some of what to expect on Saturday.

“Hopefully having that experience from last season will help us turn things around this year,” said Smith. “We appreciate the support received by the Fleahop faithful on Tuesday night. We hope Bear Nation continues to support us like that moving forward.”