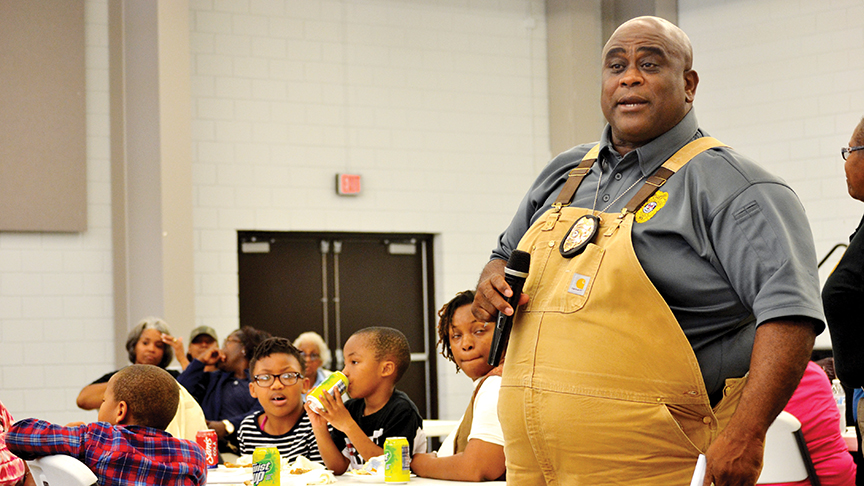 The city’s top law enforcement officer hopes to make a preemptive strike on crime in Brookhaven by reaching out to future offenders.

He and a couple of police officers along with Rev. Philip Sterling met with a dozen or so students for about an hour and a half at one of the schools and talked to them about their disruptive actions.

The visit was at the invitation of a school administrator.

“They’re having problems with the young kids, getting in trouble and stuff,” he said.

The project is already making a difference.

“We’re starting to go around to each school and the kids we’re having problems with, before they get locked up, we’re trying to make an interdiction with those kids and I think we got two of them’s attention today,” he said. “That’s what we’re going to start doing. That’s something that I can do to try to make a difference.”

Collins said he’s trying to address problems with students before they go too far and get sent to the alternative school over discipline issues.

“Those are the next criminals, the kids are getting in trouble going down cutting school, they the ones gonna start robbing and stealing,” he said.

The target age is 15 to 17 years old, but he’ll take a group to Lipsey Middle School to talk to students if the school requests it. He believes it may take an intervention by someone other than school officials and parents to get through to the students.

Collins said he shared his own story with the students Tuesday and explained how he went from a child growing up in hard times to a police officer working under Pap Henderson’s and Bobby Bell’s administrations to eventually becoming the chief of police in his hometown.

“We give testimony. It’s true-life stories,” he said. “I could have went either way. I wasn’t all the time the chief. I used to drag race, fight. If it hadn’t been for Pap Henderson and even Bobby Bell. They could have fired me many times because I was hard headed.”

He said Henderson and Bell did for him what he’s trying to do for the youth of Brookhaven.

Henderson treated him like a son and showed him tough love, he said.

“It’s because of Pap Henderson really, and Bobby Bell helped because he could have fired me because I was headstrong. But they put up with me and showed me a different way,” he said. “Anger is not the way to go, because once you’re angry God can’t dwell in you. It’s like an evil spirit and if you allow it to dwell in you, light can’t come in. It’s OK to get mad, but just get over it. Don’t get mad and stay mad. You’re in danger of doing something stupid if you stay mad. So I’m trying to teach the kids how to deal with their anger.”

He said a lot of the students are struggling with situations at their homes that could be the root of the anger that causes them to lash out at school.

“You want to reach the ones they are having the problems with, the ones that are getting in trouble cussing their teachers out, talking back to their parents. We try to reach them before they get in big trouble,” he said.

He said many teenagers he encounters in Brookhaven act like they’re invincible and won’t face consequences for their actions.

“They’re not scared. They know the laws. They flaunt that kind of stuff and say, ‘You can’t do nothing to me,’” he said. “Until they go out here and commit a murder, commit a robbery, or break in a car, then they’re adjudicated as an adult and they’re put in here with these grown folks, it doesn’t take them long to realize that they’re still kids. They’re going to put you in with grown people and you’re going to be grown then.”

Collins tries to steer them in the right direction by sharing his own story.

“That’s a choice they’re going to have to make or either wind up dead or in jail,” he said. “I could have been the same. I come from the projects. Food stamps. Welfare. I was just gifted in football. I had 15 tackles a night if I was angry.  But you have to get some wisdom to realize you want people to see God in you, not an angry person.”

The chief said this investment of time may be what is needed to create a safer Brookhaven.

“You just never know. What you say might can change somebody’s life,” he said.