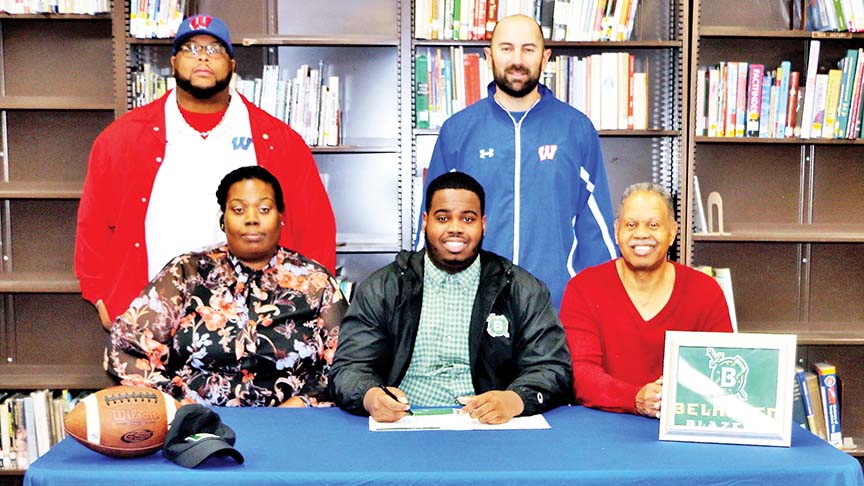 Wesson Attendance Center senior offensive lineman Malik Clay charted his football future Thursday when he signed a scholarship with the Belhaven University Blazers in a ceremony in the school library.

Belhaven went 2-8 last season in what was their fifth season playing as a Division III member of the NCAA. Previously the Blazers had been an NAIA program after the founding of their football program in 1998. The Blazers play in the American Southwest Conference and slid into that slot after former member Mississippi College moved up to Division II.

The Blazers are led by head coach Blaine McCorkle. McCorkle was a four-year letter winner as a player at LSU and completed his first season at Belhaven last season after previously serving as the offensive line coach at the University of Delaware.

Clay says the Blazers see him contributing on the line as an offensive tackle. They like how physical the 6-foot-3, 320-pound Clay plays. As a junior and senior Clay and the Cobras played in Region 8-3A and faced some of the stoutest defensive lineman in the state. Clay says blocking players like Nathan Pickering, a 6-foot-3, 285-pound defensive end from Seminary, has him prepared for whatever may come in college.

“You learn to do whatever it takes to block your man when you’re going against people like that,” said Clay. “You learn to compete on every down.”

Competing on every down is the message that Wesson coach Jeremy Loy has stressed in his three years leading the Cobra program. It’s a sermon that Clay says is shared with passion from his coach.

“Coach Loy is the best,” said Clay. “You always know he cares about you, especially when he’s hollering at you. He’s competitive and pushes you, I’ve loved playing for him.”

Clay mentions that Loy has his player’s backs. A good word from a high school coach can mean the difference in a senior getting recruited and getting passed over. When Loy spoke to the Belhaven coaches about Clay, he had nothing but praise for his senior leader.

“Malik has come a long way,” said Loy. “He told me when he was younger that he wanted to ‘make it’ one day and sign a scholarship. He’s worked hard to earn this and we’re just happy for that opportunity.”

Clay knows he’ll need to work in the weight room and get stronger as he moves to the next level. He mentions improving his foot-work as another goal for the future. He plans on majoring in sports medicine. Loy says Clay possesses football smarts to go along with his book knowledge.

“He was the guy making calls on our line for us this season,” said Loy. “He knew where everyone was supposed to be on every play and he has a feel for the game in that regard.”