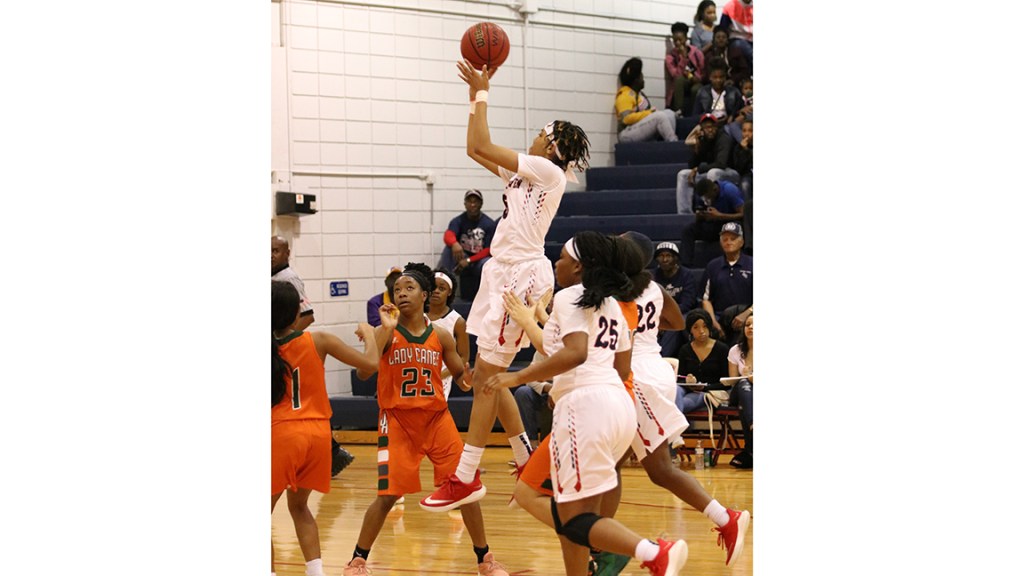 Photo by Becky Green/Brookhaven High junior forward Silentianna Collins rises over the West Harrison defense on Friday night. Collins scored 26 points in a 73-46 win over WH. BHS hosts unbeaten West Jones tonight with a trip to the Mississippi Coliseum on the line.

This is the one that everyone has been waiting for. The Brookhaven High Lady Panthers (27-1) host the undefeated West Jones Lady Mustangs (26-0) tonight in Sinclair Gymnasium in a MHSAA 5A third round playoff matchup. The winner will next play in the Mississippi Coliseum in the state semifinals against the winner of Neshoba Central versus Germantown.

The Lady Mustangs are coached by Sharon Murray and are coming off a season in which they finished 26-4 last year and lost 48-47 to Hattiesburg in the 5A state title game.

The closest WJ has come to defeat this season was a pair of close wins over their region rivals, South Jones. On Jan. 4 the Lady Stangs beat SJ 60-56 and on Jan. 25 they beat the Lady Braves 54-50. Brookhaven and coach Preston Wilson played South Jones on Feb. 1 and beat the visitors from Ellisville 53-48 in Sinclair Gymnasium.

West Jones beat Picayune 49-16 in the second round of the playoffs on Friday.

On Friday the Lady Panthers whipped West Harrison 73-46 in their second-round matchup. BHS led 44-9 at halftime.

The Lady Mustangs are paced by the duo of junior Brikayla Gray and senior Jurnee McLaurin.

Tipoff for West Jones at Brookhaven High is 7 p.m.