All-you-can-eat pancakes are back Tuesday for Servitium fundraiser 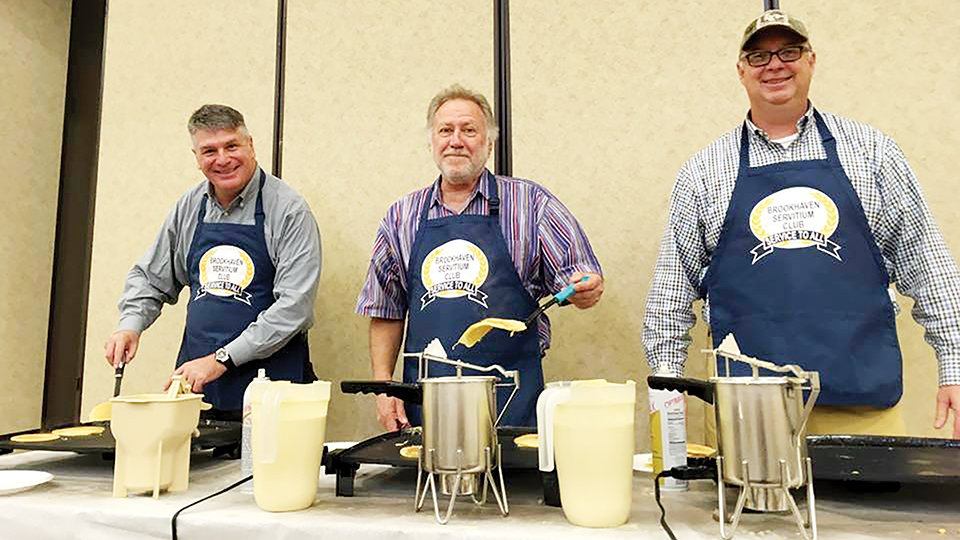 Thomas Lynwood Moak would have been 97 in just a few days.

Moak was known by the many hats he wore — among them postmaster, businessman, barbershop quartet singer, avid supporter of Scouting and a servant to his community. Born in 1922, he was just one year younger than the second oldest civic club in Brookhaven — Servitium.

The 68th annual Tom Moak Memorial Pancake and Sausage Day is today, and will be held at First United Methodist Church in Brookhaven. The first one was in 1951 and Moak was there. He was present at every one for 62 years, until his death in 2013. Pancake Day was renamed then in his honor.

Plates are $7 each and will be served until 7 p.m., take out or dine in, and sit down diners can keep on eating until they’re flap jacked out. Coffee, milk and juice will be available, too.

Organizers say all 1,200 printed tickets have sold and lots of people will show up without a pre-purchased ticket. That’s OK, Pancake Day chairman Jay Greer says, because a ticket isn’t required.

Founded in 1921 by John Bent Perkins as Kiwanis, the club changed its name in 2013 to Servitium, meaning “service to all,” and broke with the national Kiwanis Club in order to keep all money raised locally to support local youth services. The club has two fundraisers annually that have provided funds in past years to such organizations as Baptist Children’s Village, Berean Children’s Home, Mississippi’s Toughest Kids, Doll’s House Mission Home and Methodist Church Blessings in a Backpack. The fundraisers are a red beans and rice sale every November and a pancake day every February.

The breakfast flapjack fare is served in memory of Moak and his character of service.

Greer said although he did not know Moak, rumors and legend have been passed down about him and his involvement in the fundraiser.

“What I’ve heard about Mr. Tom was Pancake Day was his baby, and he was a real stickler to make sure everything went smooth and if it didn’t he’d be sure to let you know,” Greer said. “I’ve heard that he would even measure pancakes to make sure they were the right size.”

Last year the service organization donated approximately $15,000 to area causes, including $5,000 in scholarships to Mississippi Scholars for graduating high school seniors. The bulk of that money came from pancake sales.

The Servitium Club meets at Mitchell’s Special Events and Catering each Wednesday at noon for lunch and a program. For information about attending a meeting as a guest or joining the organization call 601-695-8123, talk to a club member at the pancake event or just show up for a weekly meeting.

There’s one more thing on Greer’s mind as pancakes are flipped, sausage is served and perhaps the spirit of Tom Moak hovers over his shoulder.

“I just hope everything goes well,” he said.