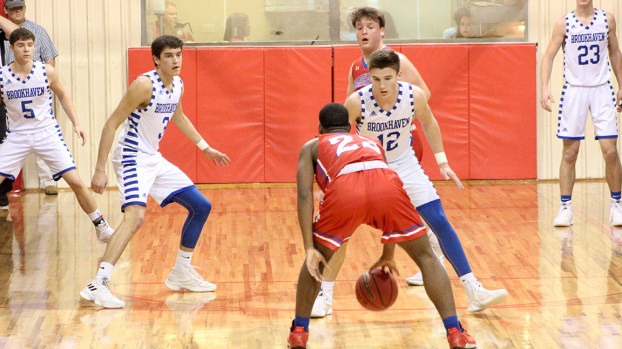 The Brookhaven Academy Cougars keep all eyes on Everett Jones of Marshall Academy. Senior Tanner Thurman (No. 5), senior Cade Brown (No. 3), senior Dawson Flowers (No.12), and freshman Tyler Fortenberry work together to slow down the Patriot offense. 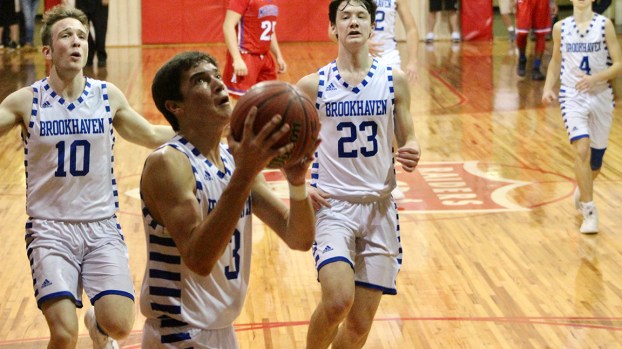 BA senior Cade Brown runs in for a layup as Sean Beard and Tyler Fortenberry trail in transition. 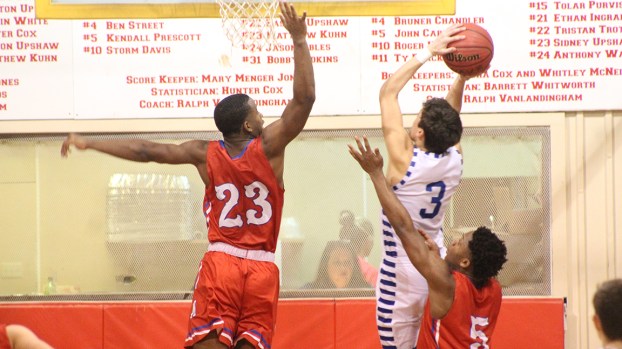 Cade Brown of Brookhaven Academy goes up for a layup against the defense of Everette Jones on Saturday. 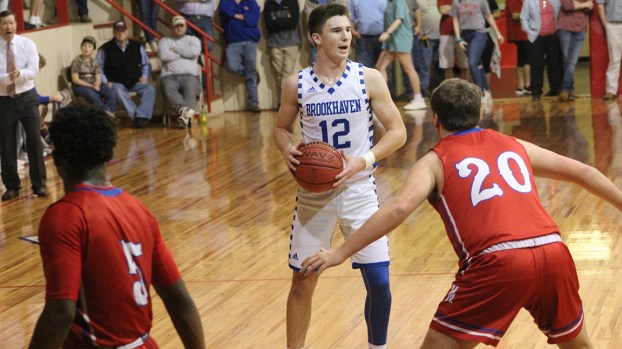 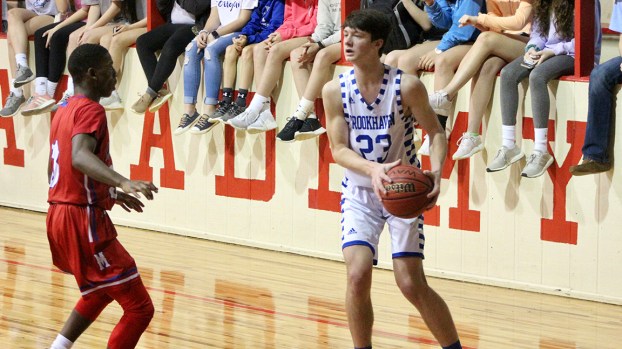 BA freshman Tyler Fortenberry controls the ball in the first half against Marshall Academy. 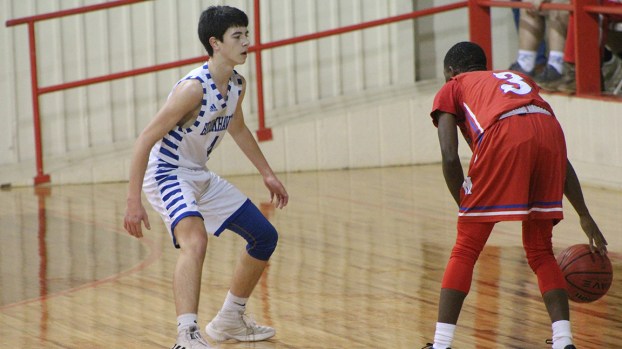 Junior point guard Britton Nelson of Brookhaven Academy squares up on Marshall Academy guard Sam Greer in the first half on Saturday.

They never trailed, never panicked, and never gave up an easy basket. The Brookhaven Academy Cougars (32-3) made it back-to-back MAIS AA State Championships on Saturday with a wire-to-wire 37-31 win over the Marshall Academy Patriots (25-5) at Benton Academy.

Coach Josh Watts made a change in his starting lineup to combat a Marshall team that relies on pressure and speed. He moved senior Sean Beard to the bench and replaced him with the taller Tyler Fortenberry, a freshman.

“Sean has been great for us all year and has hit some big shots, but I felt like with Tyler out there the size advantage would be big for us,” said Watts.

The young, 6-foot-3 Fortenberry scored the first four points of the night for BA as both teams came out looking like they had the big-game jitters. The first Cougar basket came on a heater of a pass from Dawson Flowers to Fortenberry on the block. The freshman caught the ball in his chest and laid it up to give BA a 2-0 lead.

Fortenberry would score again when a blocked shot fell into his arms and led to another layup. Flowers got his first basket later in the quarter, but the period ended with BA holding a 6-4 lead after the first eight minutes.

The offensive execution began to pick up in the second quarter, but one thing that never wavered all game was the physicality of the Cougar defense. With Fortenberry, his brother Tray (6-foot-5), Flowers (6-foot-4), and Cade Brown (6-foot-3) patrolling the paint, the smaller Patriots struggled to score the ball. The officiating crew allowed the game to be played with a level of physicality in the paint. Flowers says that’s something his team tries to take advantage of. “In the playoffs, especially in the tournament finals, the refs let contact go inside,” said Flowers. “We try to play with our hands up and make them shoot over us. You want to make them earn everything.”

As tough as things were in the interior, the Cougars did battle foul trouble in the first half. Both Flowers and Brown picked up two fouls in the first quarter.

Watts rarely had the two in at the same time after that until late in the game as he used Beard and Tray Fortenberry to rotate his senior forwards in and out.

A Brown layup and another by Beard had BA up 13-4 in the second quarter before a 3-pointer by Jeremiah Jones and a layup by Zach Sorrell pulled MA to a 13-9 halftime deficit.

Flowers scored a game high 13 points and in the third quarter he asserted himself on the offensive end to give his team a cushion. He scored six points in the quarter and twice jumped out in passing lanes to pick off passes and then lay them up.

BA led 24-14 after the third quarter, but Marshall would refuse to go away. The Patriots scored seven straight points to pull within 24-21.

When the Cougars needed a basket, they went back inside to Flowers. The senior was being guarded by three Patriots, but Tyler Fortenberry dumped a perfect pass over the top that Flowers finished with a reverse layup.

Junior point guard Britton Nelson would then go right into the Marshall pressure to score a layup of his own. The next BA possession saw Brown fly in for a monster slam off the bounce to ignite the large BA contingence of fans who had made the 100-mile trip to Yazoo County.

“I could feel my man on my hip and knew I could get past him to the basket,” said Nelson.

The Brown dunk put BA up 30-21 and forced Marshall coach Jeremy Ervin to call a timeout.

Senior forward Everette Jones is the best player on the Marshall roster and he did what he could to will the Patriots back into the lead. The powerfully built Jones knocked down a pull-up jumper that pulled MA within 31-29 and forced Watts to call a timeout.

Flowers and Brown hit late free throws to preserve the win and the final play of the game for BA was freshman Tyler Fortenberry throwing a full-court pass to Flowers for a game sealing layup.

The win was a mirror image of how the Cougars have won all season. Brown and Tanner Thurman both drew charges as the BA defense squeezed the Patriot offense all night. The offense flowed through Flowers and Nelson took advantage of the defense late to score four big fourth quarter points.

The Cougars controlled the pace of the game and were able to slow things down if Marshall ever began to play too quickly.

“Everybody did their job,” said Watts. “Britton stepped up and made some big plays at the end. Dawson and Cade did a great job of playing smart after they got in foul trouble. For a freshman, Tyler was fearless in the biggest game he’s ever played in.”

Marshall plays next in the Overall State Tournament against Jackson Academy today at 3 p.m.

The Overall State Tournament has usually been looked on with indifference by most of the schools that participate in it. The tournament is meant to crown a champion of champions, but it’s almost always won by the largest schools in the association such as Jackson Academy or Madison Ridgeland Academy.

The Cougars will be one of the favorites this year and could win the first Overall title for the school since 1989. BA lost once this season to Copiah Academy when Flowers and Brown were out at the all-star football game. They also lost an overtime game at Jackson Prep and another road game at Presbyterian Christian School.

Watts is a competitor and wants to win the final tournament this week, but after securing the trophy on Saturday and having spent the better part of a week in rural Yazoo County, he was ready for one thing late Saturday night. “I’m ready to go home,” said Watts. “It’s been a long week, a great week, but I’m ready to head to the house.”