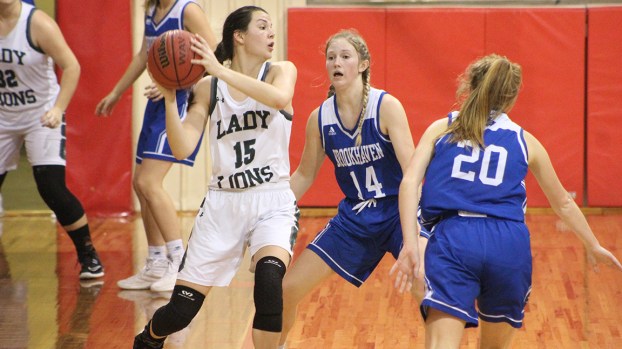 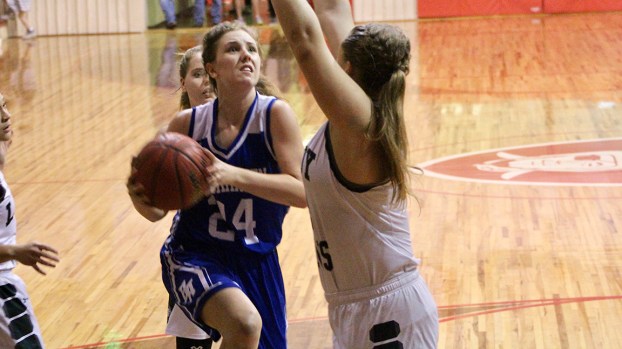 Daily Leader/Jana Case puts up a shot against the Lamar Christian defense in the AA state title game. 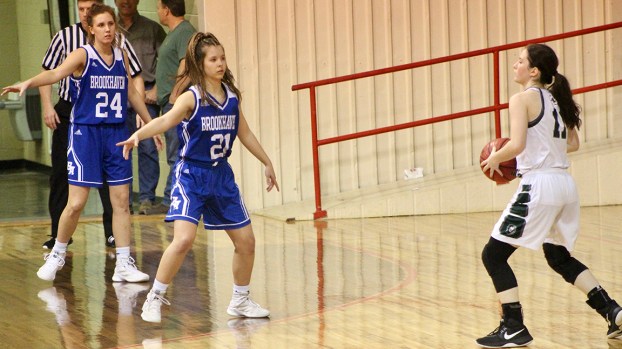 Daily Leader/Anne Brantley Warren (No. 21) and Jana Case (No. 24) of Brookhaven Academy play defense against Catharine Hannabass of Lamar Christian on Saturday. 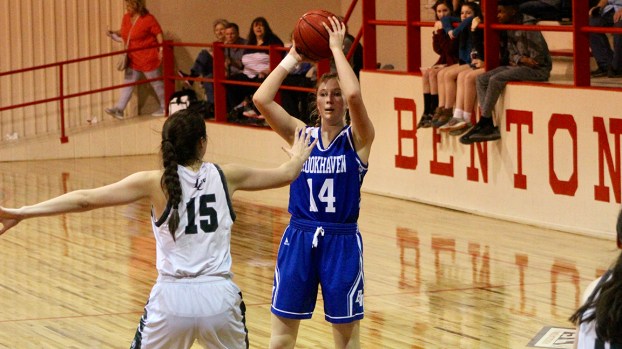 Daily Leader/BA freshman Emily Claire Felder looks for an open teammate in the second half on Saturday. 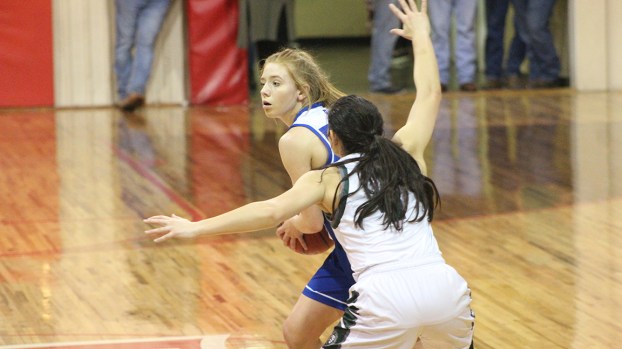 Daily Leader/Makayla Martin looks for an opening against the Lamar Christian School defense in the second half on Saturday. 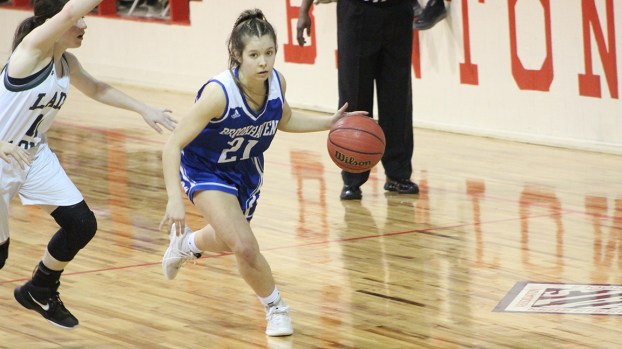 The Lamar Christian School Lady Lions (32-3) crowned a dominating season on Saturday with a 29-22 win over the Brookhaven Academy Lady Cougars (27-8) in the MAIS AA State Championship.

The game at Benton Academy was delayed for an hour by a tornado watch. The fans were asked to move from the bleachers onto the court and the teams returned to the dressing room as a tornado had been spotted near Vaughan. When play finally began both sides looked sluggish to begin as BA led just 6-4 at the end of the first quarter.

Brookhaven Academy used their zone defense to slow down Lady Lion leading scorer Rebekah Engle throughout the game. A week earlier in the south state championship Engle scored 14 points in the first quarter on the way to a 22-point effort as Lamar beat BA 44-27 on their home court.

Engle would end Saturday with only five points, but her teammates began to step up in the second quarter as LCS made their move. A basket by senior guard Racheal Pitts tied the game at 6-6 and then the Lady Lions took the lead on a Catherine Hannabass 3-pointer that came off great skip pass over the zone from Kalie Blackmon.

Hannabass and Pitts would each score a team high 10 points to lead the LCS offense.

After going up 14-9 on a Hannabass 3-pointer the Lady Lions elected to hold the ball the final three minutes of the first half. Brookhaven stayed in their zone, but LCS didn’t get a basket after running out the final 180 seconds of the second quarter. It’s the same strategy LCS coach George Coll had used last week in the south state title game.

A basket by Macy Grace Smith on the first BA possession of the second half cut the lead to 14-12 and came off a Makayla Martin assist. The Lady Cougars later cut the lead to 20-17 on a 3-pointer by Anne Brantley Warren. The lead shrunk to one point when Jana Case scored off of a hook-shot in the lane from a baseline-inbounds play. The only non-senior in the LCS starting lineup — it was Hannabass who answered — this time with a 3-pointer that came just before the third quarter buzzer. The shot felt like it killed any momentum created by the Cougars in the third quarter.

Down 23-19 at the start of the fourth quarter, BA had to go man to stop LCS from holding the ball. The Lady Lions motion heavy offense is difficult to guard with a man-to-man look, but Brookhaven got a few stops when they stepped out of their zone.

Case nailed a 3-pointer to pull BA within 23-22 off a Martin assist. The sophomore dribbled into the paint and found Case coming in behind her from a trap for a huge basket.

Case scored a team high eight points for the Lady Cougars and Warren added five. Case, Martin, and Warren were named to the all-tournament team.

LCS again would hold the ball and did so beginning with 6:30 remaining in the game. BA coach Jason Case let that go on until 4:00 minutes remained before he put his team back in a man-to-man look.

A pair of Becca Chatham free-throws put LCS up 25-22 and BA then saw multiple opportunities to pull closer squandered. The teams combined for five consecutive turnovers with the Lady Cougars committing three of them. LCS began playing keep-away as 60 seconds remained in the game.

After being forced to foul, the Lady Cougars got more chance to tie after Hannabass missed the front end of a 1-and-1, but a Martin corner 3-pointer was off the mark and LCS knocked down four straight free throws to secure the win.

The Lady Lions will be one of the favorites this week at the MAIS Overall State Tournament at Mississippi College. The only losses this season for LCS were to AAAA-Division 2 champs Simpson Academy, AAA runners-up Columbia Academy, and MHSAA 4A Purvis. LCS were 9-1 against MHSAA schools including wins over playoff teams St. Patrick, North Forrest. Greene County, and Lumberton.

Lamar Christian plays Pillow Academy on Tuesday at 10:00 a.m. in the Overall Tournament.

BA plays in the Overall Tournament today at 1:30 p.m. against Jackson Prep in A.E. Wood Coliseum on the campus of Mississippi College. The Lady Cougars lost 49-47 at Prep on Jan. 5.