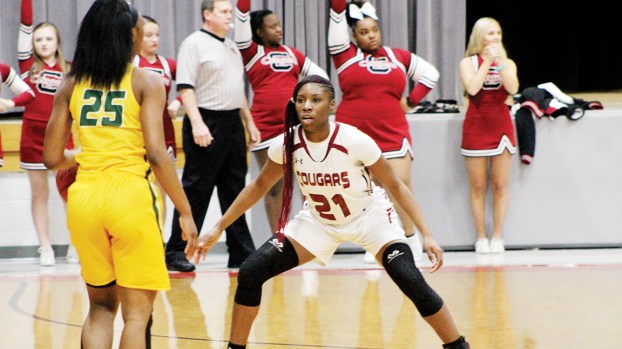 Photo by Cliff Furr Kyunna Thomas of Lawrence County gets down to guard Ebony Gaden of McComb on Friday in their MHSAA 4A Tournament second round matchup.

The McComb Lady Tigers came out with a confident look offensively as they jumped out to a lead and never trailed in a 44-40 win over Lawrence County in the second round of the MHSAA 4A state playoffs in Monticello on Friday night.

McComb led 15-11 after the first quarter and with 2:51 until halftime they had run that margin out to 23-13. That forced LC coach Vicki Rutland to call her first timeout of the game.

The Lady Cougars then went on a mini run to cut the lead to 23-17 and appeared ready to go into the break only down two possession. However, just before the buzzer McComb senior Zabreana Tucker put up a deep 3-pointer that beat the horn and put the Lady Tigers up 26-17 at the break. Tucker realized how low the clock was and put the shot up in a rushed motion that splashed through to hit nothing but net. Her coach led the team in a sprint to the visitor’s dressing room.

In the second half the Lady Cougars turned up the pressure with a full-court defense at times and a half-court trap at others. Gray would counter with an adjustment of using a Box-And-1 defense on LC senior Kyunna Thomas.

Rutland said the Lady Cougars kicking up the pressure in the second half comes down to a numbers issue. The Lady Cougars only use six or seven players most games.

“I thought we’d cause some turnovers with our pressure, but we needed to stay out of foul trouble and also to save our legs,” said Rutland. “We came alive in the third quarter when we sped the game up.”

McComb led 35-30 after three quarters, but with their fans cheering and McComb turning the ball over due to pressure, it felt like the Lady Cougar comeback had all the momentum.

Lawrence County guard Tresha McCullum came up huge for the Lady Cougars over the final minutes of the game. Her layup with 1:50 remaining cut the McComb lead to 38-36. The assist on the play went to Thomas who whipped a pass to McCullum that many a lesser player would never have caught.

McCullum then tied the game on a deflection that went off the hands of senior forward Casey Lewis. The ball landed in the arms of McCallum who quickly went up with a layup that knotted things at 38-38.

In the scramble after the tying basket, McComb rushed down and quickly took back the lead on a tough Alisha Tucker layup. Tucker scored 13 points with nine of those coming before halftime.

It would again be McCullum who tied the game up again for LC as she calmly sank a pair of free throws after a McComb foul in the backcourt.

The score would stay 40-40 for less than 10 seconds though as McComb quickly passed the ball down the court as senior Ebony Gayden scored on a layup that gave the Lady Tigers their final lead. Gayden would later hit a pair of free throws that sealed the victory.

On Wednesday Gayden signed with Jones College to play basketball next season. Thomas is also a Jones College commit as well. Gayden scored 17 points to lead MHS while Thomas was held to eight points.

Lewis scored a team high 14 for the Lady Cougars as the senior was excellent with her work inside.

“Our senior class of Kyunna, Casey, Jakiara Buckner and Tyunna Slay have been our leaders all season,” said Rutland. “We’re going to miss them, and I wish the results in their last game would have been different. You’ve got to tip your hat to McComb, they’ve got a good program and tonight they earned the win.”

Lawrence Co. eliminated by Lanier Bulldogs in 2nd round