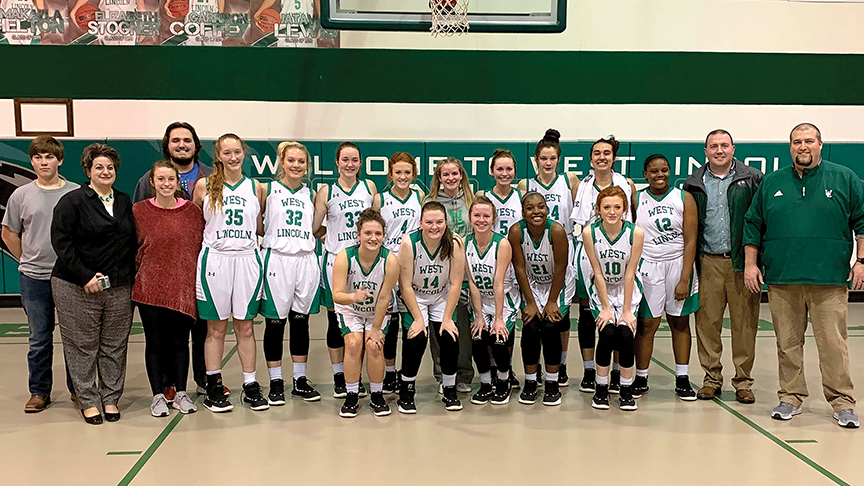 Photo submitted The West Lincoln Lady Bears advanced to the MHSAA 2A State Tournament semifinals on Monday with a 52-42 win over Taylorsville. Coach Brooks Smith and his Lady Bears next play Tuesday at 9 a.m. in the Mississippi Coliseum.

The green and white nation is headed to the Big House.

For the first time since 2010, the West Lincoln Lady Bears (25-5) have advanced to the semifinals of the MHSAA 2A State Tournament after beating Taylorsville (19-9) 52-42 in a packed Jack Case Gymnasium on Monday night.

The Lady Bears next play in the breakfast special Tuesday at 9 a.m. in the Mississippi Coliseum. They’ll take on the winner of the Ingomar (33-3) versus Calhoun City (29-1) game in the state semifinals.

In the 2009-2010 season then coach Lane Young guided the Lady Bears to the state semifinals where they were eliminated by Myrtle, 57-30.

On Monday night the matchup against Taylorsville was all about who would get hot early and who could sustain that through the entire game. In the first quarter the Lady Bears found themselves down, but they closed the game like the veteran team they are.

Coming out aggressively — perhaps too aggressively as they picked up early fouls — the Lady Bears held a 6-1 lead off of back-to-back 3-pointers from senior Skylar Hall.

The lead would soon be gone as the Lady Tartars took advantage of the Lady Bears’ early aggressiveness by creating turnovers to turn the game in their favor.

Like most of the season, the Lady Bears started off slow and trailed 14-8 at the end of the first quarter.

In the second quarter senior forward Katelyn Dickerson would get things cooking for the WL offense.

Dickerson was on fire as she scored 16 of her team’s 18 points in the second quarter as the green and white sprinted out to a 26-16 halftime lead.

“Katelyn Dickerson was hot as a firecracker in the second quarter,” Lady Bears coach Brooks Smith said. “Without her effort we would’ve been in a little bit of trouble.”

The Lady Tartars would eat away at the Lady Bear lead in the third quarter, coming as close as 30-25 with just over three minutes remaining in the period.

That five-point differential would be the closest the Lady Tartars would come to the Lady Bears, as WL controlled the tempo of the game from there on out and led 32-25 heading into the final frame of action.

Smith has a senior led team and in the quarterfinal matchup, they made play after play to keep THS down.

“Senior Megan Gerald did her job as our floor leader,” said Smith. “Both Skylar Hall and Bailey Wilson made key free throws for us. The stats don’t show it, but senior Elizabeth Stogner hustled for us all game long.”

“From freshmen to seniors, every player had a role in us getting this far,” said Smith. “I’m very proud of them. Nothing beats playing this game and the girls are experiencing something I never did get to experience as a player. I’m extremely proud of the girls and we want to keep it going.”