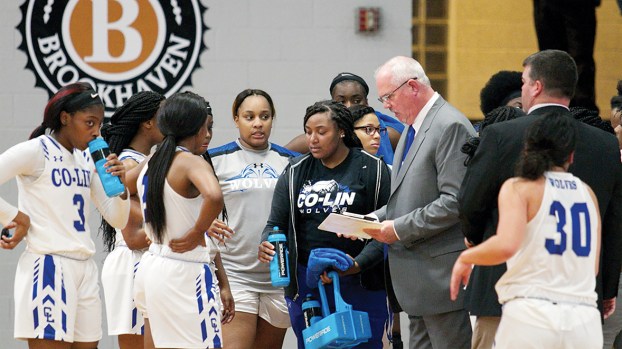 Photo by Co-Lin Athletics Information Coach Gwyn Young and his Lady Wolves (19-5) play today at 1 p.m. in the MACJC State Tournament semifinals at Jones College. The Lady Wolves take on the Itawamba Lady Indians (20-3) who came into the tournament as the No. 1 seed from the North Division.

The Copiah-Lincoln Community College Lady Wolves cruised to victory in the first round of the MACJC State Tournament with a 65-47 win over East Mississippi.

The win moves Co-Lin to 19-5 overall on the year and pits the Lady Wolves against the Itawamba Community College Lady Indians today at 1 p.m., also in Ellisville. Co-Lin controlled the game from the beginning but really took over in the second quarter.

The action was tight for the first part of the first quarter, but the Lady Wolves fired off a 9-2 run that lasted nearly four minutes in the heart of the opening 10 minutes. Co-Lin was 4-of-8 during the run and stretched their lead to 15-6 led by four points from Camryn Davis and capped off by a three-pointer from Ciara Norwood.

Co-Lin opened the third with the same intensity as the Lady Wolves quickly poured in four straight points. The Lady Lions got in more rhythm later in the quarter to prevent Co-Lin from completely running away with the contest. Going into the fourth, Co-Lin led 52-29.

EMCC fought back hard in the fourth quarter as the Lady Lions found seams in Co-Lin’s man-to-man defense to drive to the basket. Midway through the quarter the Lady Lions had outscored Co-Lin 10 to six and cut the Lady Wolves’ lead to 58-39, but Co-Lin held late to secure the victory, 65-47.

Camryn Davis led the Lady Wolves with her fifth double-double on the year with 14 points and 15 rebounds. Sha’Quandra Carter also had a stellar game as she poured in 13 points. TaMara Riley rounded out the top scorers with nine points.

EMCC was led by Tatyana Norment with 13 points and Tye Mecalf with 10 points. Aamiya Rush led the Lady Lions on the boards with five rebounds.

They never trailed, never panicked, and never gave up an easy basket. The Brookhaven Academy Cougars (32-4) made it back-to-back... read more