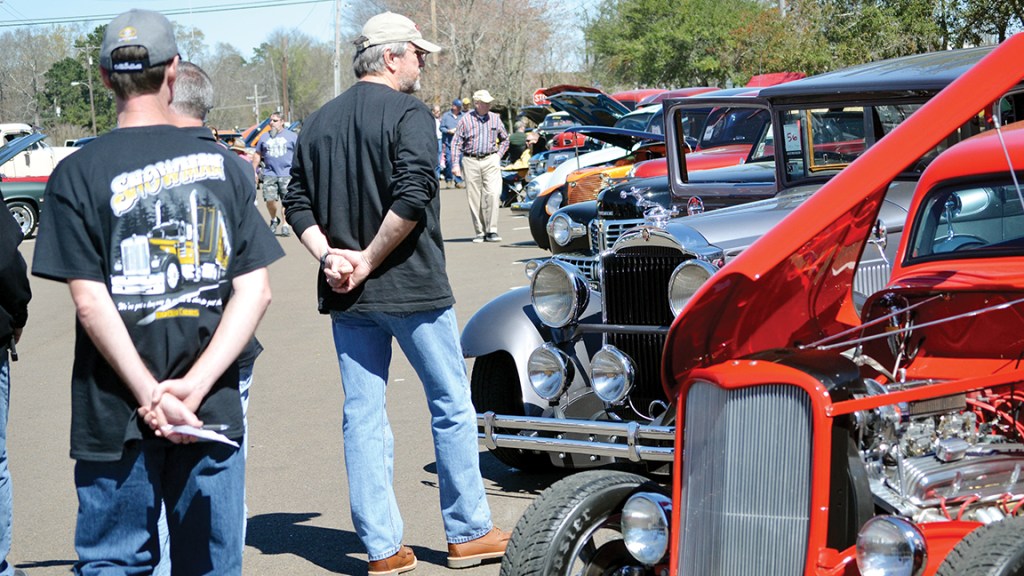 Photo by Donna Campbell Brookhaven Mayor Joe Cox, center, was one of hundreds of spectators who admired the offerings in last year’s Goin’ To Town car show along Railroad Avenue downtown.

T-Tommy Smith is t-totally sure there’s going to be a car show Saturday. Rain or shine.
The National Weather Service is forecasting a 40 percent chance of scattered showers for the area, which meteorologist Anna Wolverton said means it could rain, or not.
“It will be scattered showers, maybe some storms,” she said. “Mostly it’s just supposed to be rain, if you get anything. There’s a greater chance it won’t rain.”
And if it does?
“We’ll get wet,” Smith said.
The Goin’ To Town Car Show will fill the downtown area around Railroad Avenue beginning at 9 a.m., starting with opening ceremonies. Members of the Ole Brook Cruisers will be directing entrants to their spots beginning at 7 a.m. Registration Saturday is $15.
Dash plaques are given to the first 150 vehicles registered.
The show, which is sponsored by Fielder’s Pro Shop and the Brookhaven-Lincoln County Chamber of Commerce, averages about 250 entries a year. Smith has received about 60 applications, but most will likely pay a little extra to register Saturday morning.
“They want to wait and see what the weather’s gonna do,” he said.
The show will go on, rain or shine, because there’s no other dates available to move it to. This time of year, the car show circuit gets full, he said.
Regardless of how many entries they have, they’re getting ready for the show. They’ve stuffed more than 200 goodie bags and gathered more than 200 door prizes. Anyone who registers a car gets a number in the bucket for a prize.
Smith has prizes to award for correct answers to trivia questions as well.
The car show will follow the same format as it has since it started in the mid-80s — lots of great vehicles to look at, prizes for the people with the winning rides and a few surprises, like the Brookhaven Fire Department’s Jaws of Life demonstration.
This will be the third or fourth year the firefighters use the extraction equipment on a car at the show.
“Not just any vehicle though,” Smith said, laughing. “We’re not going pull the doors off somebody’s car.”
The demonstration has become a popular part of the car show.
“That’s neat. Everybody likes watching that happen,” he said. “It’s a good thing.”
Smith said the Ole Brook Cruisers continue to organize the car show because it promotes the city so people will “come to Brookhaven to see how pretty our little town is.”
He said the car show draws about 500 participants and another several hundred who come to see the displays.
“We make quite an impact on downtown Brookhaven,” he said.
Food will be available for purchase at the Road Kill Café, which will be manned this year by the New Sight Volunteer Fire Department as a fundraiser for their crew.