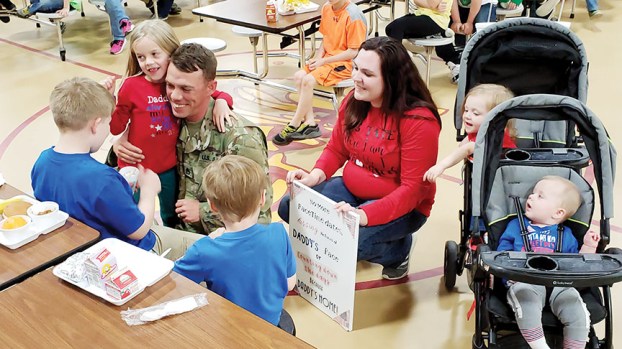 Photos by Donna Campbell Above and below, Staff Sgt. Carl Tate Jr. and his family are all smiles as they greet each other at Enterprise Attendance Center Thursday. Tate is pictured with his wife Rebekah and their five children. 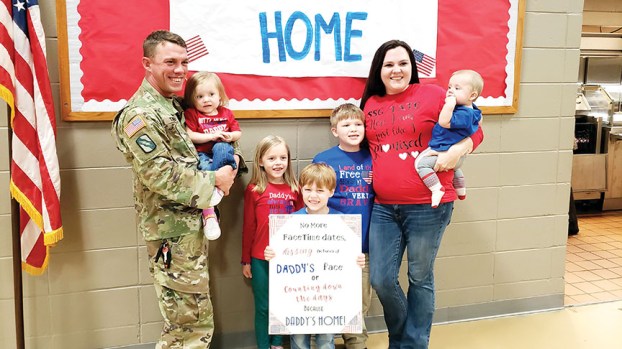 Photos by Donna Campbell Above and below, Staff Sgt. Carl Tate Jr. and his family are all smiles as they greet each other at Enterprise Attendance Center Thursday. Tate is pictured with his wife Rebekah and their five children.

Wearing camo fatigues and heavy boots, Carl Tate Jr. did not blend in to the crowded school cafeteria Thursday.

Standing twice as tall as most of the elementary diners, he was easily spotted walking toward three of his children. His huge smile and the sign he carried, said it all:

“No more FaceTime dates, kissing pictures of Daddy’s face or counting down the days because Daddy’s home!”

Staff Sgt. Tate, of 1st Squadron, 98th Cavalry Regiment, surprised his three oldest children, Zoey Tate, 7; Wyatt McKenzie, 7; and Carl “T.J.” Tate III, 5; at Enterprise Attendance Center Thursday as the three — a first-grader, second-grader and kindergartener, respectively — ate their lunch together at a table in the center of the cafeteria.

Tate, 31, arrived at Thompson Field Air National Guard Base in Flowood Wednesday night from a yearlong deployment with the 155th Armored Brigade Combat Team to Kuwait in support of Operation Spartan Shield. He was met there by wife, Rebekah, and his two youngest, 21-month-old Gennifer and 7-month-old Kevin. Rebekah Tate was 8 months along when her husband was deployed in June. He held his youngest son for the first time at the base Wednesday.

Tate and his wife spent the night in Jackson with the two youngest while his mother-in-law took care of the older three and got them to school.

At lunchtime, the three were busy eating and talking, not realizing their dad was hiding in the kitchen.

Enterprise Principal Terry Brister hushed the noisy lunchroom and made the announcement they had a special guest visiting with them. Zoey was the first to turn around and see her father sneaking up behind them and her brothers quickly followed suit. Soon all three were nestled in their daddy’s arms, telling him about teeth they’d lost and sharing important discoveries like a banana on T.J.’s lunch tray.

Tate kept smiling at his children, hugging them each individually and together.

The Tates took their children home after lunch so the seven could celebrate in private.

“We’re going to go home and relax,” he said.

This was Tate’s second deployment since joining the National Guard in 2005. A guard technician, he is a 2006 graduate of Bogue Chitto High School.

Soldiers of the 155th will continue to arrive home through the end of March.