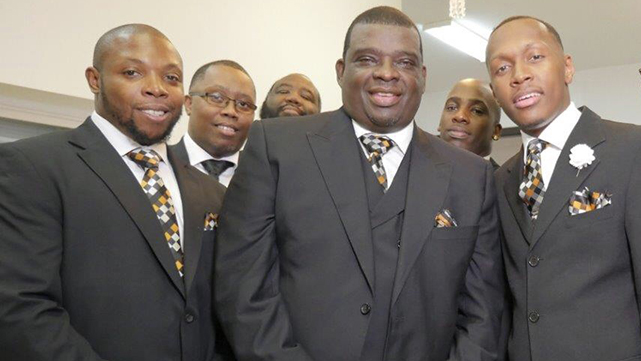 The self-described hometown boy said he was really surprised and pleased that so many people in the area seem eager to come out and support the gospel group that began back in 1978.

“We don’t know what the turnout crowd will be. It may be standing room only or turning away people,” he said. “It has just shocked me.”

Rather than go the traditional route of selling tickets online, Porter printed tickets and gave them to 13 friends and family to sell. Before long, they were coming back asking for more.

“I didn’t want to go the route of having the older men and women try to find them online,” the singer said. “People are looking for the hometown boy to come back and give something to the community, and give them a great time for a reasonable price.”

“The Jackson Five, Gladys Knight (were) coming in through the back door and Daddy was bringing in gospel through the front door,” he said, laughing.

From a high school quartet formed when he was 16 with three of his brothers, Porter brought his love for the Lord and musical harmonies with him when his father retired from building cars and returned home to Sontag when the teen was a senior in high school. Attending Enterprise and Lawrence County high schools, he continued to sing for record companies in Mississippi and all over the U.S.

The Christianaires formed in Sontag with the Porter brothers and two cousins who had been singing the blues. They blended their influences and styles together to become a successful international gospel sensation for 28 years. When the group disbanded in 2006, due to the health of some of the members, the youngest Porter continued with a solo career. He’s just ending a contract with Motown Records and is grateful for the years of fun and opportunities he’s had.

Though friends and fans have let him know they’re coming from places like Ohio, Chicago, New Orleans and Jacksonville, Florida, Porter said the show is really all about hometown.

“All the hoopla is, I believe, that my hometown is really proud of us, so I’m trying to honor the older members of the groups by having this at home,” Porter said.

The concert will feature all of the original members of The Christianaires — except for James Lee, the one deceased member — and the following groups: Marvin Watkins Jr. and The Canton Spirituals; Willie Banks Original Messengers of Jackson, Mississippi; The Gospel Legends; Maurice Yancey and One Accord; Tyrone Lindsey and Golden Bells; Pastor Michael O. Evans and Men of the Cross; The Veal Brothers; The Brothers; Derick Bridges and Transparent; and Minister Seamore and The Jubilee Travelers.

Tickets at the door, should there be any room for additional attendees, will be $25, or $5 for children under the age of 12. The program starts at 6 p.m. at Lawrence County High School, with doors opening at 5 p.m.

But for those who don’t get to be part of the celebration, Porter has other news — they can download his new single. It’s a cover of “I Wanna Know What Love Is,” by Foreigner, sung as a duet with Ruben Studdard and produced by Elvis “Blac Elvis” Williams.

“It’s really good. You’re going to like it,” Porter said.