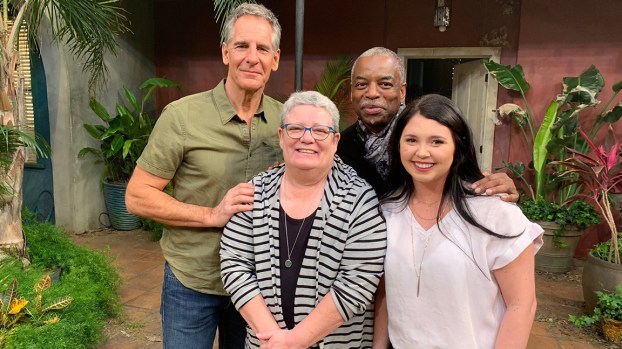 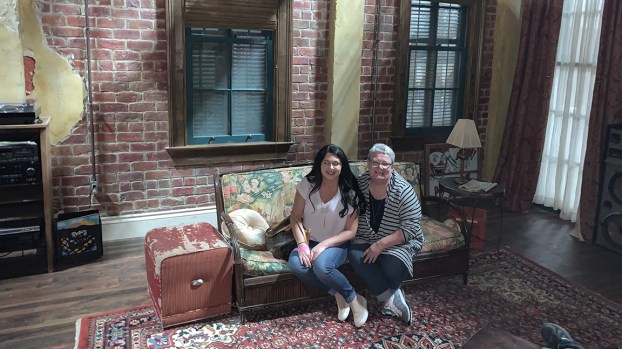 Photo submitted Above: Pictured are, from left, Alex Mullins and Lanell King, relaxing on the set of “NCIS: New Orleans.”

Two Lincoln County women spent their afternoon before Valentine’s Day in the Big Easy having big fun on the set of “NCIS: New Orleans.”

Lanell King of East Lincoln and Alex Mullins of Brookhaven both work at Summit Family Dentistry. Mullins, 23, is a receptionist, and King, 59, handles insurance.

The adventure last month actually started last year, when King took her daughter and two granddaughters to the Crescent City to see Rod Stewart at the New Orleans Jazz & Heritage Festival. It was April 28 and Stewart was filling in for Aretha Franklin, whose doctors advised against her performing.

As they headed out of the car, King noticed a wallet on the ground. She picked it up and flipped it open to look for an ID or a way to return it quickly. Inside was a California driver’s license belonging to actor Scott Bakula.

“I really didn’t think it was his,” King said.

She was familiar with his work on “Quantum Leap” and “Star Trek: Enterprise” but she didn’t usually watch crime shows like NCIS. Not like her co-worker, Mullins, who is a huge fan of the CBS drama.

She called Mullins to tell her what she’d found and heard squeals on the other end.

King said she was convinced the wallet belonged to Bakula because of the American Express Centurion Card, known informally as the Amex Black Card, inside. Those are invitation-only credit cards and King figured he’d want it back as soon as possible.

She correctly guessed he might be at Jazz Fest so she took it to the “lost and found” booth. He told her later he’d been at the festival the night before to see Sting and returned to see Stewart.

When he realized he’d lost his wallet, he retraced his steps and finally checked lost and found, she said.

Mullins penned a letter to him for King and she mailed it to the address on the license to let him know King had found his wallet and where she’d left it.

About a month later she received a call from Bakula, but because she was at work, she missed his call. Bakula left a voicemail.

“He told me what a great person I was and that he was so thankful for what I’d done,” he said. “And he wanted to invite us to the set of NCIS if that was something I wanted to do and send us out to a nice supper.”

Bakula’s assistant, Adam Larrabbee, contacted her a few weeks later to schedule the visit. They finally found a date in February when the show wasn’t on haitus from filming and King and Mullins were off at the same time.

She said she knew she’d take Mullins because the young woman was such a huge fan. “She’s kind of adopted me and I guess I’ve adopted her. Well, I know I have,” she said.

Watching Mullins watch the celebrities was a thrill.

“It was an awesome experience,” King said. “She was thrilled. She was awesomely excited.”

On the set they met actor Lavar Burton of “Reading Rainbow” fame, who directed the episode being filmed that day. They also visited with everyone else on the set, including Bakula, who stood with them on all of his breaks for the four hours they were there.

King binge watched five episodes of “NCIS” the night before they left for New Orleans. She’ll watch it again when “their” episode airs. Even though they’re not in any of the scenes, they watched a lot of them being filmed.

For Mullins, it was a dream come true.

Mullins watched the action from one of the director’s chairs behind Burton. They ate lunch with the crew and posed for pictures in all of the sets. There’s even one of Mullins on the morgue table.

“Everything there is all real,” she said. “They don’t want anything fake.”

It was all more than she could have imagined.

“We didn’t think it was going to be much of anything,” Mullins said. “He is so nice. He’s just like a normal person. He’s super nice.”