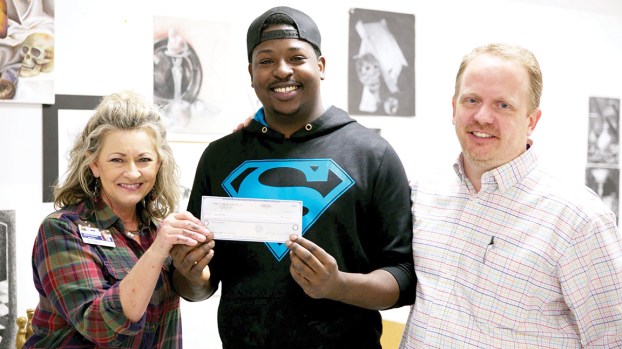 Photo submitted/Co-Lin art student De-Markus Miller was chosen recently as the recipient of a $1,000 scholarship given by an anonymous donor in honor of Brookhaven artist Rosemary Leggett. Leggett chose the recipient. Pictured are, from left: art instructor Janet Smith, Miller and art instructor Chris Brady. 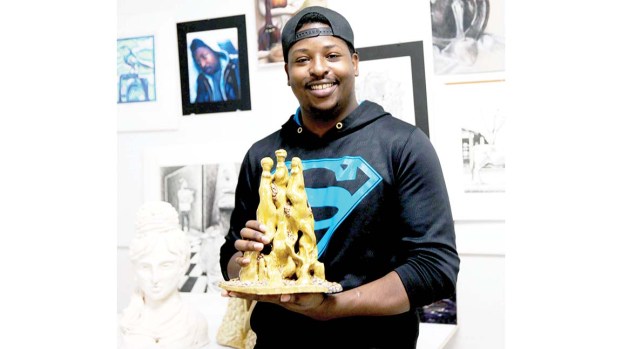 Photo submitted/Co-Lin art student De-Markus Miller was chosen recently as the recipient of a $1,000 scholarship given by an anonymous donor in honor of Brookhaven artist Rosemary Leggett. Leggett chose the recipient.

A Copiah-Lincoln Community College student now has $1,000 extra to spend on his education.

De-Markus Miller was the recent recipient of a one-time scholarship given by an anonymous donor in honor of Brookhaven artist Rosemary Leggett. She is the current president of Brookhaven Regional Arts Guild and wife of Dr. Hugh Leggett.

Leggett was asked to choose a student she felt was deserving of the award, and she picked Miller.

The 20-year-old sophomore art student has a passion that transforms what he sees into a creative energy that is expressed through his hands for others to appreciate. Both the current products of that passion and whatever may come in the future are what drove his benefactor to choose him, Miller said he was told.

“I can’t believe this. I am shaking,” Miller said as he posed for a photo with the check and his primary instructors, Janet Smith and Chris Brady.

A 2017 graduate of Franklin County High School, Miller has been largely self-taught his entire life. Although he had an art class there was not a lot of guided instruction, he said. So any new techniques or mediums were up to him. When he began to experiment with pen and ink, he found a place that was comfortable, a medium of expression to which he could return often. He calls it his “safe zone.”

So stepping into his first class at Co-Lin was like stepping into a new world. His exposure to art education had been so limited, he felt his eyes were open to new possibilities of creativity.

“When I got to Co-Lin, it created an opportunity for me to branch out and create my own art,” he said.

He was first introduced to paint as a medium in a design class. The change in looking at art from the perspective of lines to seeing in shapes of color was a very different experience.

“It’s a whole new way of looking at things, with color. I can’t say much about it, but so far I’m liking it a lot.”

He was working on an assignment in a painting class recently when he said his teacher interrupted the class to present him with a check and tell him he’d been chosen as the recipient of a scholarship. Miller was floored.

“It caught me by surprise,” he said. “I’m so appreciative of it.”

He’s twice won a student competition to be named best in class, winning the privilege of designing the Co-Lin Christmas print, the sales of which help both with funds for the school’s art department and an annual donation to the Brookhaven Animal Rescue League. The prints are painted by students or faculty.

When he won the competition the first time, Miller said it felt so amazing to know people were going to buy something he helped create. He’s still both proud of and humbled by winning a second time to create this past season’s print.

Whatever he does, he said he wants to represent his family and the school well.

He’s enrolled in more than the average full-time load of classes this semester, and spends most of his time outside the classroom working on assignments to take back to those classrooms.

“It gets very overwhelming but I have very good friends who help me, and motivate me. They play a big role in getting me to complete and turn things in,” he said.

Since he needs motivation sometimes, he shakes his head at the knowledge that some younger students are looking to him for guidance.

“I struggle with some techniques. It’s hard for me, too,” he said.

But he encourages them to trust their instincts when creating.

“I did and it really helped me out. Just trusting in your instincts will lead you in the right direction,” he said.

He’s not sure where his educational road will take him after leaving the Wolves of Wesson behind, but he knows he won’t quit.

“I was planning to just do these two years and then take a break and work and save up, but Mrs. Janet and Mr. Brady encouraged me to keep going and not stop, because nine times out of 10 artists who take a break like that get comfortable and don’t want to continue with their education,” he said.