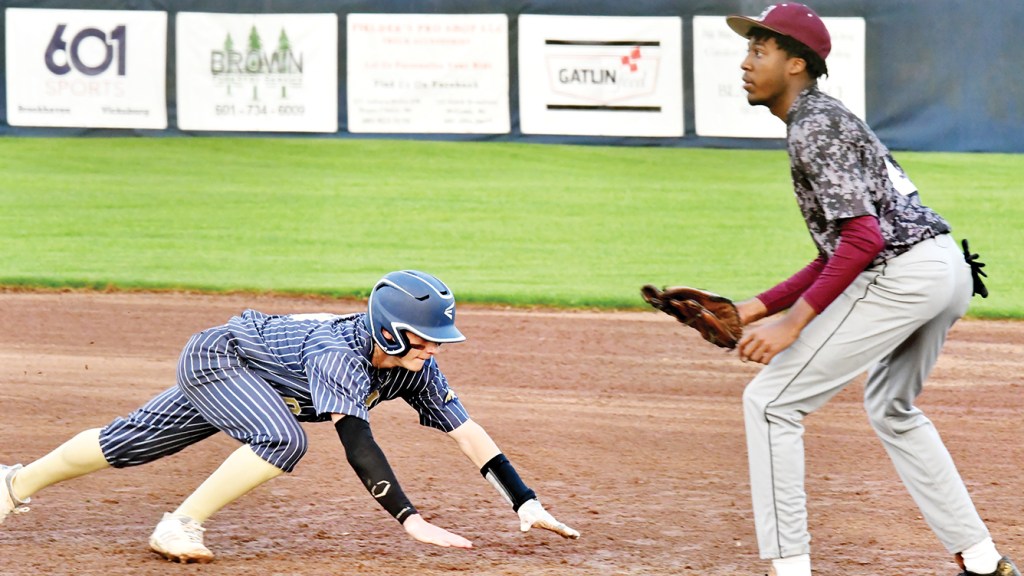 Photo by Stacy Leake J.T. McCaffrey of Bogue Chitto beats a throw back to the bag on Friday against Hazlehurst. McCaffrey scored one run and walked once in a 15-0 BC win over the Indians. Bogue Chitto begins Region 7-2A play tonight against Loyd Star.

Believe it or not, a few area teams will begin division play for baseball this week.

The cycle of wet weather has devastated early season scheduling for baseball teams all around the state. In a season opening three-week period during which most schools would have already played close to 10 games, many in our area have completed less than five.

Bogue Chitto has played more than anyone in the area as they boast a robust 4-3 record. The Bobcats and coach Garreth Sartin host Loyd Star tonight at 6:30 p.m. and then return the game to Loyd Star Friday at 7 p.m.

Bogue Chitto picked up a 14-13 win over Salem last week and a 15-0 trouncing of Hazlehurst. The Bobcats dropped their final two games of the week with an 11-10 loss to Tylertown late Friday night and an 11-1 loss to 5A Natchez on Saturday at Enterprise.

In the win over Hazlehurst, Felder Sartin went 2-of-2 at the plate with a team high four RBIs. Brandon Welch and Owen Anderson combined for the shutout win on the mound as they held Hazlehurst to one hit. Hazlehurst issued a combined 13 walks in the game.

Loyd Star (1-2) faced BC on Feb. 16 at Wesson and saw the Bobcats come away with a 6-5 win. The Hornets broke through for their first win of the season on Saturday morning with a 3-2 victory over Lawrence County.

In the win over LC the Hornets got RBIs from Brent Cade, Stephen Mills and Rials Hester. Hester got the start on the mound and scattered five hits while striking out five in six innings. Reese DeHart pitched a perfect seventh inning. Cade hit the game winning RBI for LS.

Enterprise (2-1-1) hosts Amite County tonight at 6:30 p.m. in another divisional matchup. The Jackets saw their invitational tournament last week get shuffled and reshuffled due to soggy conditions. The Jackets still had a strong showing with a 4-3 win over Natchez and a game against Lawrence County that ended in a 2-2 tie. The return game to Amite County will take place Friday at 7 p.m. in Liberty.

Colby Beard pitched five innings and gave up six hits while striking out two against Natchez. Austin Fugler also saw time on the mound and struck out two. Fugler also hit a double and Trenton Tarver drove in two RBIs.

West Lincoln is the only member of Region 7-2A that doesn’t begin division play this week as the Bears travel to Salem tonight at 6:30 p.m., Terry on Thursday, Franklin County on Friday and Puckett Saturday.

The Bears (1-1) are coming off a 24-3 demolishing of South Pike. Travis Hall drove in six runs in the win over SP. Taylor Allen and Garrett Maxwell had three RBIs apiece for WL. Gavin Burris picked up the win on the mound.

Wesson also gets Region 8-3A play started this week with a game on Saturday against Columbia High at 1 p.m.

Coach Seth Lofton and the Cobras (2-2) picked up a win over 6A Terry High on Saturday. The Cobras outhit Terry 12-8 but committed four errors. In the bottom of the seventh Wesson got the winner on a Jim Guess single that scored Lane Thompson.

The Cobras play tonight at Franklin County at 6 p.m.