Lady Bears on to 2A state finals 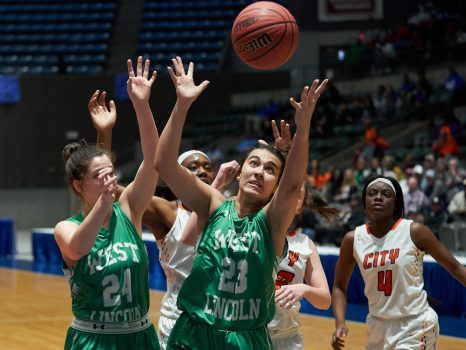 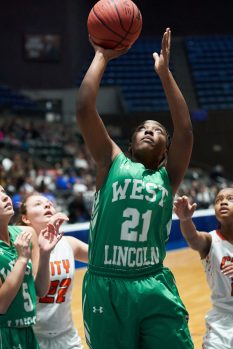 The West Lincoln Lady Bears (26-5) did something no other 2A team in the state had done this season — on Tuesday morning they beat the Calhoun City Lady Wildcats (30-2).

With their 53-50 win in the MHSAA 2A semifinals the green and white now move on to the championship game Friday at 1 p.m. against Newton High School.

Playing at 9 a.m. in the Mississippi Coliseum Tuesday, the Lady Bears controlled the pace as they led for over 25 minutes of action. Calhoun City only led for 85 seconds of the game.

The coliseum is an experience that teams can’t really prepare for. Most high school teams shoot, practice and play on goals that are attached to the walls or ceiling of their gym. The free-standing baskets that sit on each end of the coliseum court offer a challenge in the depth perception of most high school shooters. Not having a wall immediately behind the basket makes a difference.

West Lincoln finished the game shooting 37.7 percent as they went 20-of-53 from the floor. The Lady Wildcats — who had previously only lost this season to 6A Oxford — are a team that is known for playing at a fast pace.

West Lincoln head coach Brooks Smith wanted to keep CC in check by keeping them off the boards.

“One of our keys today was to handle the pressure and rebound,” said Smith. “We didn’t do a great job of those overall, but we did enough to come out on top.”

Calhoun forced 19 West Lincoln turnovers and won the rebounding battle 48-41. The Lady Wildcats struggled to shoot all game long as they finished 30.6 percent from the floor by making 22-of-72 attempts for the game.

Slowing down CC sophomore Quan Bailey was another key for Smith and his team.

“We tried to limit Quay Bailey’s touches, but she was still a load to handle,” said Smith. Bailey finished with 10 points.

Bailey went to the bench in the first quarter with an injury as the Lady Bears led for nearly the entire first eight minutes. The game was scoreless for the first three minutes before senior forward Katelyn Dickerson broke the ice and put WL up 2-0.

Just before the first quarter buzzer, Kei Honey of Calhoun City hit a long 3-pointer to put her team up 10-9.

In their quarterfinal game Calhoun City had knocked off three-time defending state champs Ingomar in a game which saw Honey score 29 points. On Tuesday she went 4-of-24 from the floor as WL held her to 11 points.

WL led 24-22 at halftime and 40-36 after the third quarter. With 4:26 remaining in the game they had grown their lead to eight before holding off a CC comeback. A Honey 3-point attempt that would have tied the game at the buzzer rimmed out.

As they have all season, WL had different players step up in different ways in this win. Senior sharpshooter Skyler Hall scored nine points but struggled from deep as she went 1-of-6 from the 3-point line.

That was negated by senior Elizabeth Stogner stepping up and having one of her best games of the season. Stogner tied her season high with 11 points and did so by shooting 3-of-4 from the 3-point line.

Coach Smith compares Stogner’s shooting form to a cannon in that when her range is dialed in, she can heat up in a hurry. Smith stuck with that analogy in the postgame.

“The cannon was firing on all cylinders tonight,” said Smith.

The WL offense also got a boost from the bench as sophomore forward Brittany Sturkey scored 17 points in 22 minutes of action. Sturkey went 6-of-7 from the floor and 5-of-6 from the free throw line.

“Brittany Sturkey has been energy for us all year,” Smith said. “She’s been our spark when we needed one.”

The last championship appearance for the Lady Bears was in 1957. On Friday afternoon they’ll face a Newton (28-2) team that moved to the finals after beating Puckett (29-4) 51-43.

Carloads of West Lincoln fans streamed up Interstate 55 to the Big House and Smith says his squad fed on that support in an early morning game that had the teams playing basketball during a time they would usually be moving to second period.

“I appreciate all the support today from our crowd,” said Smith. “It was nice to see all the fans behind us. I hope the whole Flea Hop community turns out on Friday for the championship game.”