Lady Wolves hold on late to advance to semis 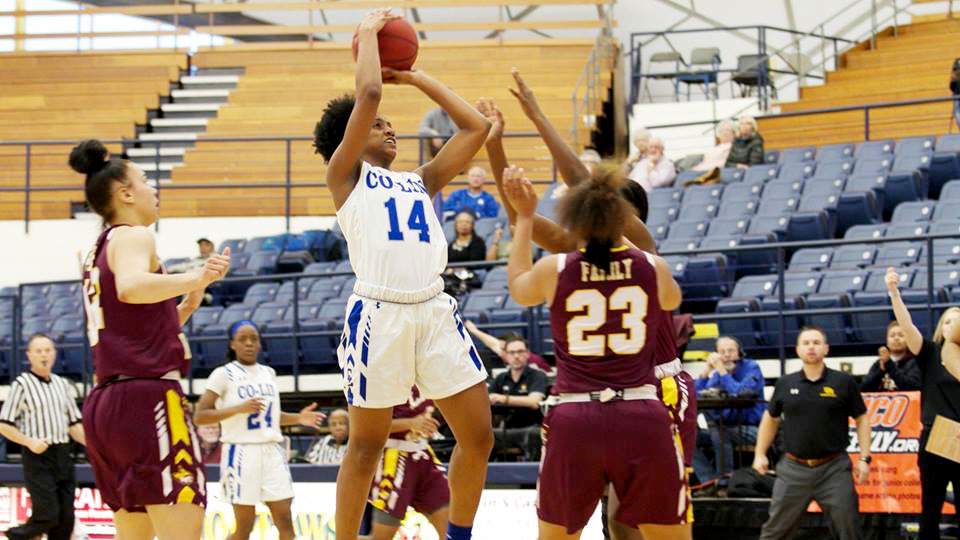 The 69-66 win moved Co-Lin to 21-6 on the year and dropped the Lady Wildcats to 16-9. The Lady Wolves will face Mississippi Gulf Coast today at 1 p.m. at A.E. Wood Coliseum on the campus of Mississippi College.

This will be the third meeting between the two schools this year as they split in regular season play. The winner will advance to the Region XXIII championship Friday at 5 p.m. to play the winner of Jones College and Itawamba. Fans can watch the matchup with Gulf Coast live at colinathletics.com.

Pearl River took a commanding lead early in the game as the Lady Wildcats rained in two deep three-pointers and a quick layup midway through the first quarter to pull ahead by nine, 13-4. The Lady Wolves looked rattled but fired back with a 14-0 run over the final five minutes to take a 20-16 lead. The offensive run saw back-to-back threes from T’Kyra Hicks and Sha’Quandra Carter, as well as three-pointers from Darien Tubby and Azaria Magee. The Lady Wolves took that four-point lead into the second quarter.

The momentum swung back into Pearl River’s corner in the second quarter as the Lady Wildcats outscored Co-Lin 17-8 during the 10-minute period. The Lady Wolves played well but simply could not get their shots to fall during the stretch. As a result, the Lady Wildcats took a five-point 33-28 lead into half time.

The Lady Wolves quickly knotted the game up at 33-33 in the third quarter, the fifth tie of the game at that point, with a 5-0 run in the first two minutes. The quick spurt fired up Co-Lin as the Lady Wolves closed out the third with an 8-2 run that featured two big three-pointers from TaMara Riley to put the Lady Wolves on top 51-45 with just 10 to play.

The fourth quarter was back-and-forth as the game was tied five times in the final 10-minutes of play. PRCC hit a pair of free throws at the six-minute mark to tie the contest at 54-54, before eventually taking a two-point 62-60 lead with just 2:32 remaining. This was Pearl River’s first lead since the second quarter. A minute later Carter made a layup for Co-Lin to tie the game once again at 64-64. After a turnover and a foul Carter was at the free throw line and rattled home both shots to put the Lady Wolves on top 66-64. After getting a rebound on the other end, with just over 30 seconds remaining the Lady Wildcats were forced to foul. The Lady Wolves hit 3-of-4 free throws down the stretch to secure the 69-66 win.

Sha’Quandra Carter led the Lady Wolves with 24 points and 15 rebounds for the double-double. Carter was 13-of-14 from the free throw line on the day. T’Kyra Hicks finished with 12 points and a pair of steals, while TaMara Riley rounded out the top scorers with 10 points. Darien Tubby led the Lady Wolves in assists with six.