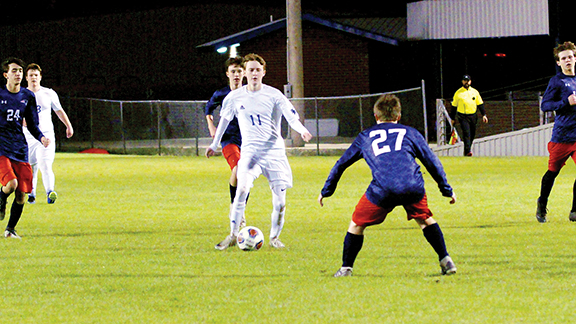 Photo submitted Brookhaven Academy midfielder Carson Rounsaville will play in the MAIS Soccer All-Star match today at 3 p.m. The match is hosted by Jackson Academy and features Rounsaville and his Blue Team playing the White Team. As a senior Rounsaville scored 21 goals and added 13 assists for the 8-7 Cougars.

Brookhaven Academy senior Carson Rounsaville will take the field for the Blue Team today at 3 p.m. in the MAIS Soccer All-Star match. The game takes place at Jackson Academy and features Rounsaville and his teammates coached by Thad Wade of St. Aloysius taking on the White team coached by Copiah Academy coach Thomas Vanlandingham.

This season for the Cougars (8-7) Rounsaville scored 21 goals and made 13 assists. Playing the midfield and as a forward, he ended his career in the blue and white with 44 goals and 32 assists.

Rounsaville has been coached by his father Clint, one of the many parents who have tried to help grow the game of soccer in the area over the years.

“Carson is a hard-working player that gives everything he has on the field,” said Clint. “He’s earned this selection and it’s not only a testament to his dedication, but to our whole team.”

The team practiced on Wednesday afternoon for the first time before playing 24 hours later. Both squads have three players each from the strong Jackson Prep program.

“I haven’t met my teammates yet, but I’m excited about being selected for the match,” said Carson. “I’m planning on attending Co-Lin next year and majoring in business.”

This will be the finale for a soccer career that saw Rounsaville rise through the Brookhaven Recreation Department program as a young child to this All-Star game selection.

His coach thinks he’ll make his school and community proud in this final match.

“I expect him to represent BA well. He’s a leader,” said Clint Rounsaville.