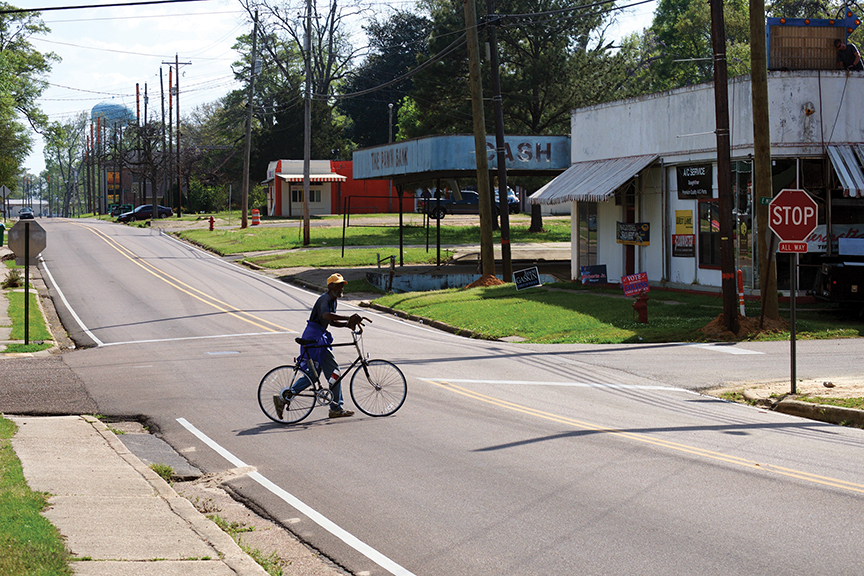 Daily Leader file photo Some illegally-placed political signs sit in the grass of a business on the corner of First and East Minnesota streets during a past election campaign. Though in front of a business, the signs are in one of the city’s rights-of-way between a sidewalk and the curb, said David Fearn, Brookhaven building inspector.

The qualifying period ended March 1 for county, district and state elections and almost overnight political signs sprouted up throughout the city like spring flowers.

Political signs — or any signs— cannot be placed on the public rights-of-way.

At Tuesday night’s Brookhaven Board of Aldermen meeting, Alderman-at-Large Karen Sullivan said she has noticed several illegally placed political signs and asked what action was being taken to curb the lawbreakers.

“Do you hold them for about 30 days?” Snider asked.

“I hold them for about a week, and put them in the dumpster out back,” Fearn said.

Signs in the public rights-of-way, which are not city, county, state or federal regulatory signs are prohibited. In some cases the signs can block someone’s view of traffic and that’s illegal and unsafe.

“It can be on private property, with their permission,” he said. “Anything right next to the street is going to get picked up.”

The city’s building inspector is responsible for enforcing the ordinance. Any person violating any provision of this ordinance can be fined not less than $50 and not more than $200. They will also be responsible for court costs for each offense.

Also, the offense can be interpreted per sign placed illegally. That means during an election season, candidates could face hefty fines, Fearn said previously.

For the most part though, Fearn just removes the sign and if it’s not picked up within a week, he trashes it.

• No signs on power poles.

• No signs in the grass between a sidewalk and a city street.

• No sidewalk? The sign has to be on the house side of the ditch.

• No sidewalk or ditch? The sign has to be on the house side of the power line.

• No signs in the planters on the sidewalks in the central business district downtown. That’s city right-of-way.

• No signs in the medians of Hwy. 51, Brookway Boulevard and Manufacturers Boulevard.

For more information on where to place signs, contact the Brookhaven City Inspector’s office at 601-833-7766.