They’ve got a Hwy. 84 baby — Woman gives birth in ambulance 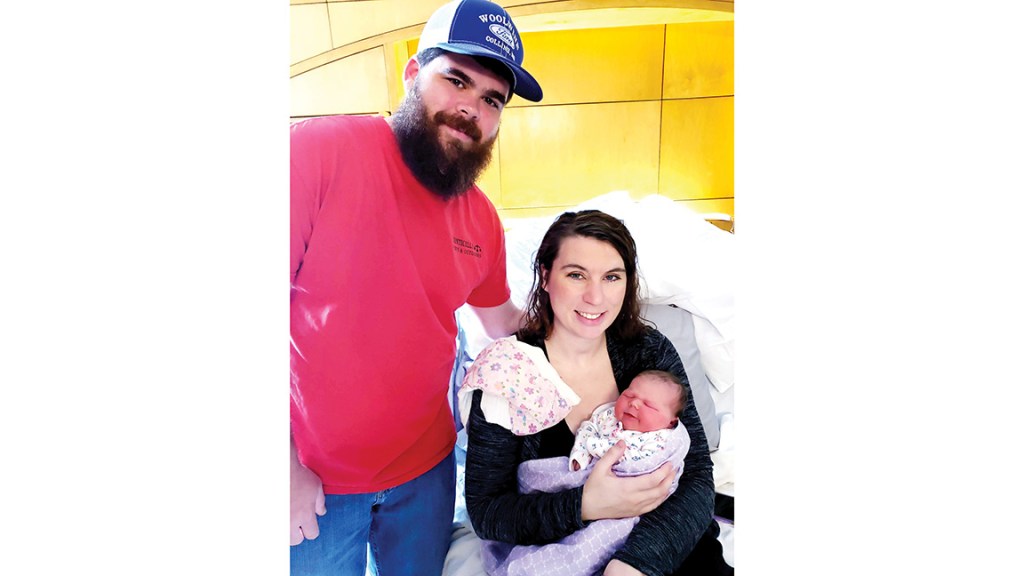 Photo by Donna Campbell Maddox Kaye Daley surprised her parents Thursday at 12:55 a.m. with a dramatic arrival on the shoulder of Hwy. 84 in Lawrence County. Pictured are, from left: Justin and Katie Daley and their newborn daughter at King’s Daughters Medical Center.

A Monticello couple can’t decide what to put on their daughter’s birth certificate for where she was born.

Maddox Kay Daley surprised her parents Thursday morning with a dramatic entrance into the world in the back of a Rapid Response ambulance. It was parked on the shoulder of Hwy. 84 about five miles from their home.

Justin and Katie Daley joke they may have to list the location as a mile marker on the highway.

Katie Daley said Maddox looks like her daddy, a 30-year-old career technology instructor at Lawrence County High School. But she also favors her mom, a 29-year-old registered nurse who holds down two jobs, working part-time at Sta Home Health in Brookhaven and full-time at Marion General in Columbia.

Katie Daley was scheduled to work Thursday but changed her plans when she felt contractions and they started coming quicker.

She craved jambalaya Wednesday so she made a pot. She also craved lemon juice so she ate a lemon-flavored snack.

Satisfied, she fell asleep on the couch and woke up with a backache so she crawled into her bed about 9 p.m. A contraction woke her up two hours later. Then came another. And another.

“I woke him up and was like, ‘It’s time to go’” she said. “They were about five minutes apart so I thought we would have plenty of time.”

Her doctor was in Hattiesburg and she planned to have a natural birth at a hospital there. Justin Daley started getting their children ready so he could take them to his mother’s house. Katie Daley walked into the kitchen to grab some towels to have in the car with them just in case and her water broke.

“Then the contractions weren’t five minutes apart anymore,” she said.

They called the ambulance and she headed to King’s Daughters Medical Center because it was closer than Hattiesburg. Justin Daley drove the kids to his mother’s and was about to leave for KDMC when the paramedic called him.

“They said they were on the side of the road and we had a healthy baby girl,” he said.

Daley arrived at KDMC not long after his wife and daughter and was allowed to cut the umbilical cord and hold his fifth-born for the first time.

He’d been part of each birth — each were born in a hospital after more than 24 hours of labor. Maddox, though slow to get here, was quick on her arrival.

“I’m curious what to put on the birth certificate,” he said.