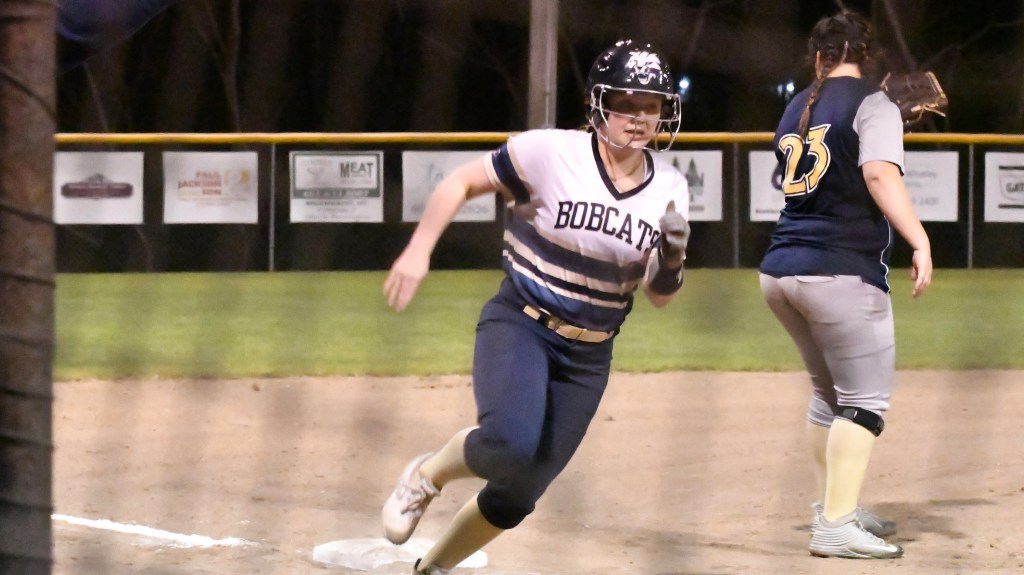 Photo by Stacy Leake Baileigh Jackson of Bogue Chitto rounds third towards home Thursday night against Franklin County. The Lady Bobcats shut out the Lady Bulldogs 15-0 to grab their first win of the season.

Here is a look at how area softball action played out on Thursday.

The Lady Bobcats (1-1) pounded out 11 hits on their way to a 15-0 whipping of Franklin County Thursday at home.

Leggett tossed a no-hitter as she struck out four and walked two for coach Kris Smith. Leggett got it done in only 44 pitches while her team drew 12 walks in the win. The Lady Bobcats are scheduled to play today in the Lawrence County tournament.

“We did a great job of fighting back and staying composed after being down 5-0,” said Delaughter. “The difference in the game was we hit the ball well tonight and got keys hits when we needed them.”

Baylee Zumbro went 3-of-4 with two RBIs for LS. Johnna Norman drove in three runs as did Carly Beth Wallace. Aly Floyd and Meagan Poole drove in an RBI apiece and Malori Cade drove in two runs. Alyssa Leggett had a double and a single while Norman hit a double and triple.

Carson Hughey picked up the win after only giving up two earned runs and striking out two while throwing 133 pitches in the circle.

Laynee Crapps hit a home run and a double for Wesson while throwing seven innings in the circle. Grapps struck out two and gave up nine earned runs while finishing 4-for-4 at the plate.

Wesson next plays March 18 at Warren Central. Loyd Star is scheduled to play in the Lawrence County Tournament today.

The Lady Bears (6-0) got another outstanding pitching performance from Adi Paden in a 10-0 shutout of Salem Thursday night. Paden tossed 49 pitches, struck out six, and gave up two hits.

Offensively it was Mary Claire Johnson who was hot as she had a double and a triple while driving in a pair of runs for coach Andrew Redd. Paden helped her own cause with a pair of hits and an RBI. Morgan Newman scored two runs and drove two runs with one hit for WL. Madison McNatt had a pair of hits for the Lady Bears. Micah Powell, Maddox Redd, and Mailey Kate Young all had a hit apiece for the green and white.

West Lincoln will take a week of for spring break and return to the diamond March 19 with a 6 p.m. region matchup with Bogue Chitto.

The 6A Clinton Lady Arrows slammed 19 hits Thursday in a 17-1 win over Enterprise (0-2). The Lady Arrows jumped to a 6-0 lead after two innings. Anna Jergins and Ainslee Jergins were the only Lady Jackets to get a hit for coach Trace Abdul-Hadi.

Weather permitting, the Lady Jackets are scheduled to play today at the D’Iberville Tournament.

Pitcher Ashley Holden struck out seven and gave up just two hits on 73 pitches in five innings for LC. Nearly half of the Lady Cougar’s 11 hits were for extra bases as Julianna Johnson hit one double and Raylee Ready hit two. Abbie Errington hit two triples for LC and drove in two runs. Alyssa Lambert also drove in a pair of runs for the Lady Cougars.

Lawrence County is scheduled to host their annual tournament today, pending the possible rainy weather that is forecast for the area.