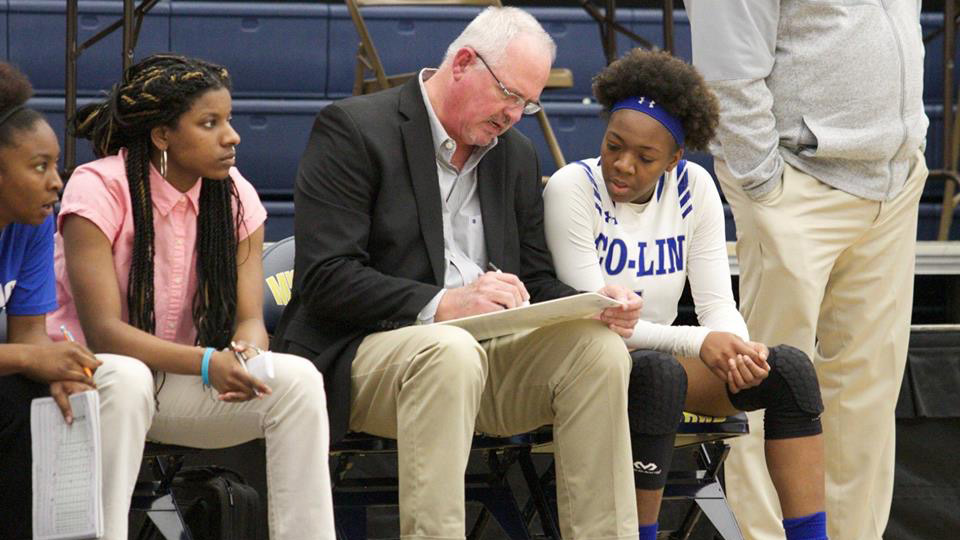 Photo by Co-Lin Sports Information Coach Gwyn Young and his Lady Wolves saw their season end Thursday with a 64-59 loss to Mississippi Gulf Coast in the Region XXIII tournament semifinals. The Lady Wolves ended the season with a 21-7 record and as MACJC State Tournament runners-up.

The Lady Wolves finish the season 21-7 overall and as MACJC runners-up. Gulf Coast will face the Jones College Lady Bobcats for the NJCAA Region XXIII Championship.

The Lady Wolves filled up the basket early as Co-Lin poured in 22 points in the first 10 minutes. The points were the results of solid shooting from all parts of the floor, including the free throw stripe. Gulf Coast stuck around in the first as the Lady Bulldogs scored 18.

Early in the second quarter, a pair of free throws from Dashell Davis gave Co-Lin their largest lead of the game, six, 24-18. The Lady Bulldogs bounced back with a 7-0 run over the next five minutes to take a 25-24 lead with just 3:51 left in the first half. The lead changed hands back and forth in the final minutes until Sha’Quandra Carter hit to deep three-pointers to stretch the Lady Wolves’ lead to four, 32-28. Gulf Coast rattled home two free throws in the final seconds of the half to cut Co-Lin’s lead to 32-30 going into the break.

Much like the second quarter, the third was low scoring as both teams picked up the defensive presence. The game saw four ties during the 10-minute span before Co-Lin pulled away to a four-point advantage after T’Kyra Hicks hit two free throws followed by a nice put-back from Alexandria Patton. The spurt put Co-Lin up 42-38. After trading several baskets, the Lady Wolves led 46-42 going into the fourth quarter.

The Lady Wolves seemed in control of the game in the fourth, until Gulf Coast’s Briana Thompson hit three straight three-pointers of Co-Lin turnovers. The nine-point swing put the Lady Bulldogs on top 53-49 with just 4:10 to play. Darien Tubby and Hicks began attacking the rim and put the Lady Wolves back on top, 55-53 with 2:16 to play, but the Lady Bulldogs pulled away with a 6-0 run that gave them four-point, 59-55, lead with just 47 seconds to play. Co-Lin intentionally fouled late in the game to force the Lady Bulldogs to the line, but Gulf Coast hit their free throws down the stretch to maintain the lead and secure the 64-59 win.

Kayla Simmons led Gulf Coast with 19 points while Daphane White scored 12. Shelli Thigpen finished the day with a double-double after scoring 10 and hauling in 10 boards.