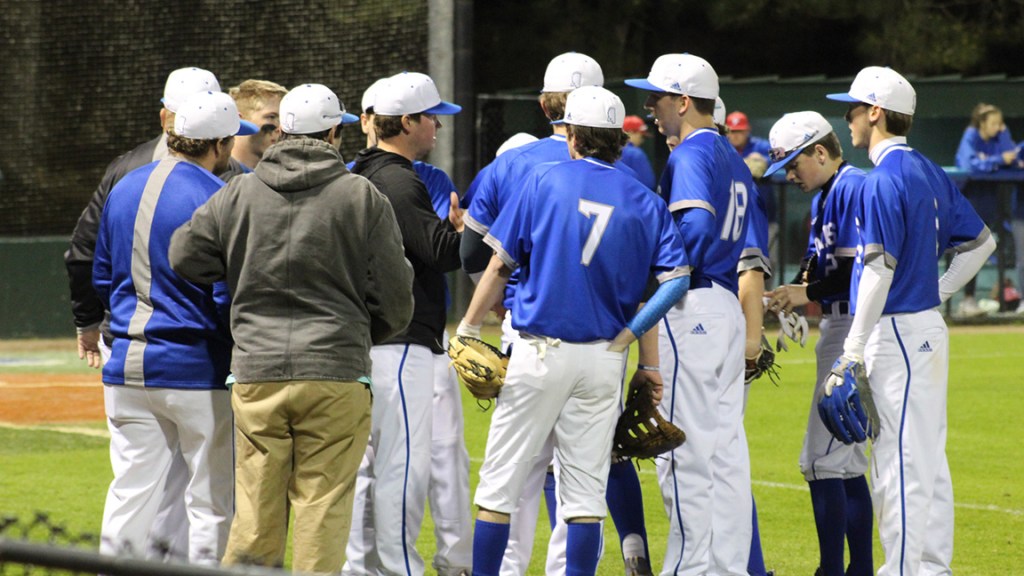 Photo by Katie Furr Brookhaven Academy coach Tyler Parvin talks with his team on Thursday night in their matchup with Parklane Academy. Weather permitting, the Cougars are scheduled to play a pair of games today at Hartfield Academy.

The Parklane Pioneers (8-2) came into Harold Williams Field Thursday and flexed their muscle as they took a 14-4 win over the Brookhaven Academy Cougars (1-4).

The Pios got four runs in the first inning and three in the second to build an early 7-0 lead.

Tanner Watts finished 2-for-3 with two RBIs and a home run for coach Tyler Parvin. Judson Griffin, Collin Waldrop, Caston Thompson, and Harrison Brownlee all hit safely for the Cougars with Thompson notching a double.

The Pioneers banged out 13 hits but were also aided by five BA errors.

BA is scheduled to play a pair of games today at Hartfield Academy. The Cougars and MRA will meet at 11 a.m. followed by a game against the host Hartfield Hawks.

Coach Cass Brister and his Yellow Jackets (3-0-1) got Region 7-2A play started with a sweep this week of Amite County High. Tuesday the Jackets whipped the Trojans 15-0 on home. Thursday night EAC traveled to Liberty and returned with a 16-2 win.

In the Tuesday night win John Burns hit a double for the Jackets. Dustin Prather, Cameron Thames, Wyatt Burns, and Trenton Tarver all hit safely for Enterprise in the win. John Burns also picked up the win on the mound.

Tarver picked up the win on the hill for Enterprise.

Enterprise is scheduled to host Wesson tonight at 7 p.m.

The Hornets (3-1) picked up their second win of the week with an 11-1 whipping of Salem on Thursday night. The Hornets scored at least one run in every inning on the way to the 10-run ruled victory.

Loyd Star outhit the Wildcats 12-3 as Stephen Mills picked up the win on the mound. Reese DeHart came in as relief and struck out four in three innings.

“We started out slow with the bats,” said Britt. “We’re starting to square some more balls up now. We just need to continue to keep getting reps in and working hard to improve each day.”

The Panthers (2-3) and coach Matt White completed their sweep of Tylertown with a 15-1 win Thursday in Walthall County.

BHS scored seven runs in the first inning and outhit the Chiefs 11-0. Sevante Quinn struck out seven in the no-hit victory.

Corbin Falvey, Maney Miller, Jacob Porter, Byrion Robinson and Quinn all hit doubles for the Panthers. Robinson also blasted a triple and scored three RBIs on three hits. Lane Smith and Luke Davis also had a pair of hits each for BHS.

The Panthers are next scheduled to play Tuesday against Loyd Star at 4 p.m. in the Lawrence County Tournament.