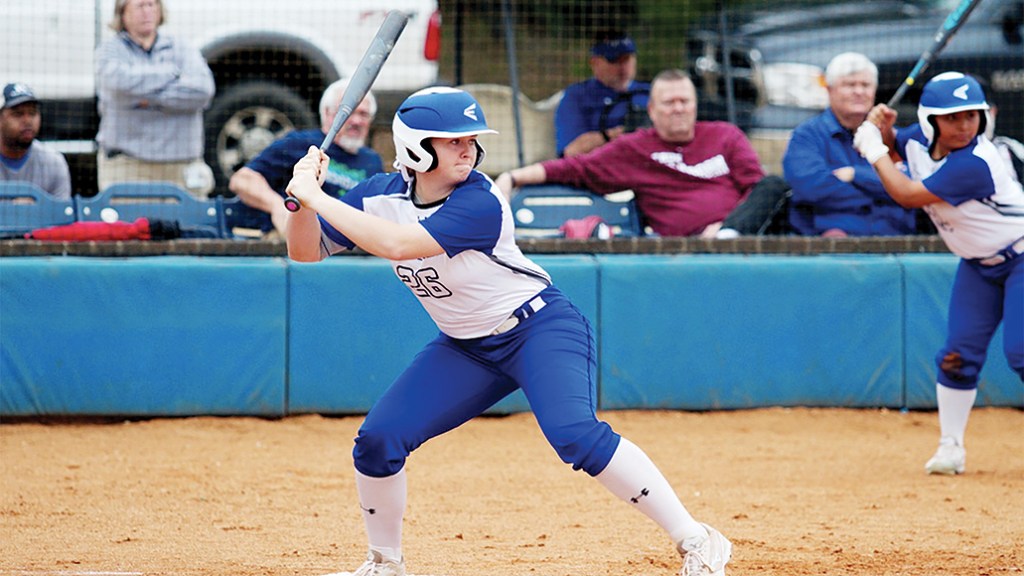 Photo by Co-Lin Sports Information Marley Poole (Loyd Star) digs in at the plate against East Mississippi. Poole accounted for five RBs in a 13-4 win.

The wins kept the Lady Wolves undefeated at 11-0 and moved Co-Lin to 2-0 in league play.

East Miss struck early as the Lady Lions took a 2-0 lead after the top of the first. The runs came on a hit batter with the bases loaded and a ground out.

The Lady Wolves did not bounce back until the bottom of the third when Hannah Walls ripped a double to center field. The hard-hit ball plated Callie Fortenberry and Katelyn Hayman who both posted singles earlier in the frame. Going into the fourth the game was knotted at two each.

Co-Lin was in position to pull away in the bottom of the sixth with runners on second and third with one out but were unable to push across a go-ahead run.

The Lady Lions got two aboard as well in the top of the seventh, but solid defense and clutch pitching shut down East Miss’ late effort.

In the final half inning, Fortenberry got on with a single and was moved to third with double from Walls. Harmoni Ashley drove in Fortenberry for the game-winning run with a single up the middle, on just the second pitch of her at-bat, to secure the 3-2 Co-Lin victory.

Kaytlon Ward earned the win for the Lady Wolves as she threw a complete game. She allowed seven hits and two runs over seven innings, striking out four.

Fortenberry, Marley Poole, and Walls each collected multiple hits for Co-Lin at the plate. Fortenberry went 3-for-4 to lead the Lady Wolves in hits. Walls finished with two doubles and two RBIs.

The Lady Wolves snatched the momentum away from the Lady Lions in the bottom of the first as Co-Lin scored five runs on two hits.

Julie Scheuermann drew a bases-loaded walk for the first run and Marley Poole drove in the second with an RBI single. Carly Polk drew a walk that plated a run, and Tori Pettit got hit by a pitch to score yet another. East Miss capitalized on a double-play to limit the damage done early.

Co-Lin poured in five more runs in the bottom of the second to stretch the lead to 10-2. Hayman and Walls both scored on errors before Poole blasted a three-run homer to break the inning wide open.

Co-Lin kept the energy up in the top of the third as only four Lady Lions made trips to the plate. In the bottom of the frame, the Lady Wolves pushed another three runs in on RBI singles from Hayman and Delaine McMillan. Scheuermann also grounded out and plated one run to pull the lead to 13-2.

Mackenzie Gros got the win in the circle for Co-Lin. She lasted five innings, allowing seven hits and four runs while striking out four and walking one.

Co-Lin racked up eight hits in the game with Hayman and Poole leading the way with two each. Poole also led the Lady Wolves in RBIs with five.