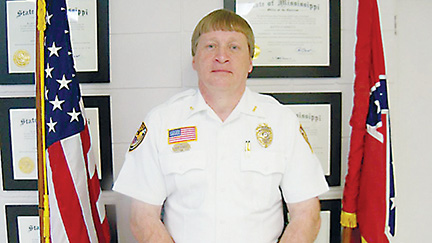 The stakes were pretty high for a McComb man who risked jail time to cram meat under his shirt in Ramey’s Marketplace.

Vernell was captured with two suspected accomplices Monday about 2:15 p.m. in a traffic stop, Stanley said.

Vernell was driving the Toyota four-wheel drive when Monticello police attempted to stop him at Broad Street. He kept going and ended up on a deadend street behind Liberty Inn.

Arrested with Vernell were Stephen Lamar Heisser, 57, of 1407 Topp St. in Jackson and Elshakethia White, 34, of 120 Gillis Circle in McComb.

Stanley said managers at Ramey’s noticed a large quantity of meat missing from the coolers Friday and reviewed video surveillance. Managers posted a video of a man stuffing packages of meat into his shirt and still photographs of what appears to be the three suspects and their vehicle. The post asked for the public’s help identifying the suspects.

Someone spotted them Monday and contacted police.

When Vernell’s Toyota was pulled over, officers found merchandise believed to be stolen from several area stores including a recent hit at Ramey’s again.

“They had a fresh pile of steak and shrimp,” Stanley said.

Police recovered steaks with Ramey’s price stickers worth $126 and also $40 worth of Ramey’s frozen shrimp. They found $224 worth of tools from Home Hardware and a large bag of clothes from Dollar General that still had tags attached.

They also found crack pipes in the vehicle, Stanley said.

The three were taken to Lawrence County Jail and White bonded out, he said.