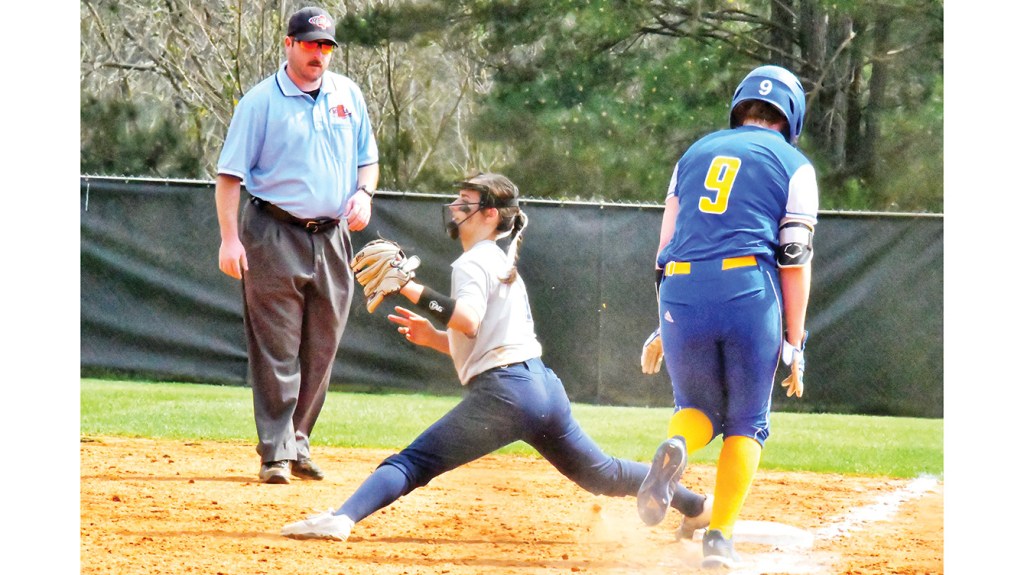 Photo by Stacy Leake Bogue Chitto first baseman Alece Nettles stretches to make a catch as Kacey Stampley of Columbia High arrives at the bag on Wednesday. Bogue Chitto plays at Brookhaven High today for a pair of games beginning at 1 p.m.

The Bogue Chitto Lady Bobcats (3-1-1) used 12 hits to cruise past the Columbia Lady Wildcats 12-5 Wednesday in a game played at Copiah-Lincoln Community College.

It was a preview of sorts as BC seniors Karly Leake and Baileigh Jackson have already signed to play softball next season for the Co-Lin Lady Wolves. Leake finished 1-of-3 and scored a run while Jackson went 2-for-3 with a double and one RBI.

Julianna Frazier had the hot bat for coach Kris Smith as she finished 3-of-4 with three RBIs. Julie Anna Bartram also had three hits for BC. The Lady Cats saw Codi Leggett (1) and Kayci Beth Wallace (2) collect hits as well.

Leggett was dominating as usual in the circle as she struck out 15, walked two and gave up five hits.

BC plays at Brookhaven High today at 4 p.m. On Saturday they’re scheduled to play Columbia at 2 p.m. at Salem. They’ll then tangle with Salem at 4 p.m.