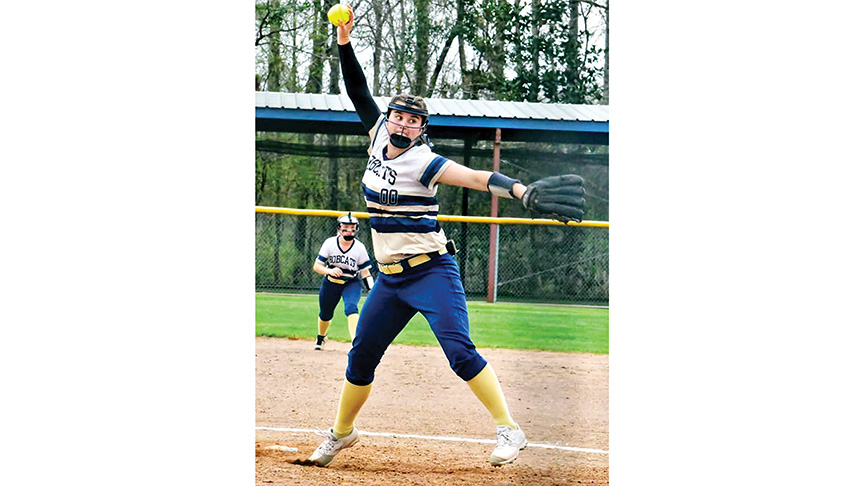 Photo by Stacy Leake Bogue Chitto pitcher Codi Leggett sends in a pitch on Thursday against Salem. Leggett gave up two hits and struck out five while walking none in an 11-0 Lady Bobcat win.

The Bogue Chitto Lady Bobcats (4-1-1) got another strong pitching performance from junior Codi Leggett on Thursday as they whipped Salem 11-0.

Leggett gave up two hits and struck out five while picking up the win by tossing only 55 pitches. She did not walk a batter.

Alece Nettles went 2-for-3 with two RBIs, two runs scored and a triple for the BC offense. Leggett helped her own cause by driving in two runs. Kylie Chapman had two RBIs as well for the Lady Cats. Kayci Beth Wallace and Julianna Frazier had a RBI apiece for BC as well.

On Friday the Lady Cats outhit the Brookhaven High Lady Panthers 11-4 on their way to a 15-4 victory. The two teams had met six days prior in a game that ended in a 3-3 tie at the Lawrence County Tournament.

Bogue Chitto went up 1-0 in the first on a single by Leggett. The Lady Cats would then add three runs in the fourth, seven in the fifth, two in the sixth and two in the seventh.

Leggett pitched seven innings and struck out 12. She gave up four hits and two earned runs.

Meg Foster led the Brookhaven offense with two hits including a triple and an RBI. Lynsey Nations hit a double for the Lady Panthers. Madi Miller also hit safely for BHS.