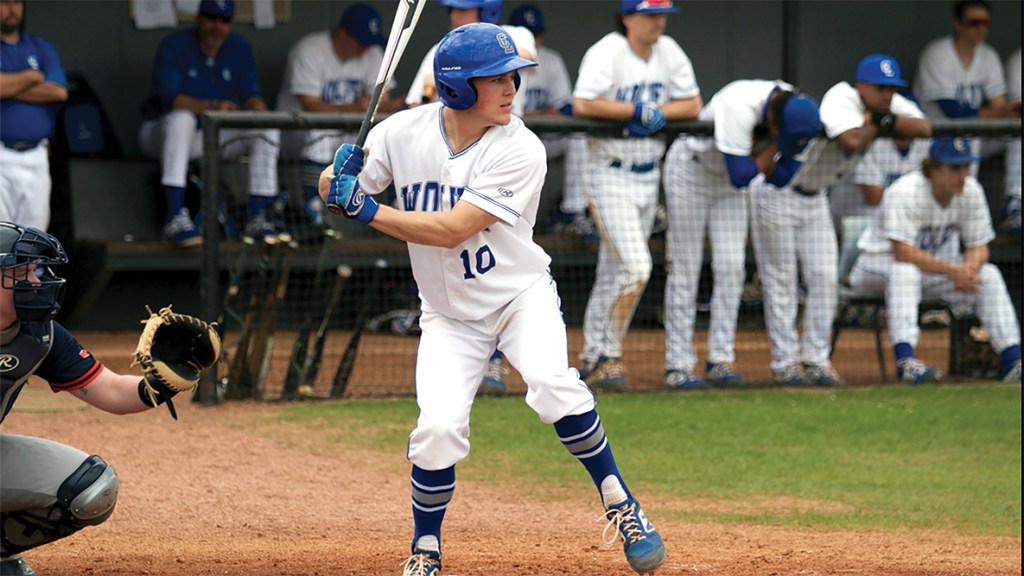 Photo by Co-Lin Sports Information Copiah-Lincoln freshman Clint Stephens (Brookhaven High) and the Wolves (9-4) host No. 5 Pearl River (15-2) today at Sullivan Field in a MACJC divisional doubleheader that begins at 3:00 p.m. On Saturday Co-Lin swept their division opener at East Mississippi. The Wolves won game one 11-5 in 15 innings and game two 3-2.

The Copiah-Lincoln Community College Wolves moved to 2-0 in MACJC play and to 9-4 overall after sweeping East Mississippi 11-5, 3-2 over the weekend.

The Wolves face the No. 5 Pearl River Wildcats today in Wesson at 3 and 6 p.m. Fans can watch live at colinathletics.com.

After a late-game push from the Lions of East Mississippi, game one of the doubleheader went into extra innings. The Wolves pushed seven across in the top of the 15th to secure the first league victory of the year, 11-5.

The Wolves looked to secure the win in the bottom of the ninth, but an inside the park home run from East Mississippi’s Tyler Miller knotted the game at 3-all.

A pitching duel ensued until Co-Lin broke the game wide open in the top of the 15th. Konner Allen drove in Justin Johnson after Brooks Italiano scored on an error. Mims followed with a double to plate Allen. Joshua Day kept the big inning up with an RBI single followed by another from Zimmerman. The Lions scratched in one in the bottom of the frame, but the Wolves held on 11-5.

Day and Slagle led the Wolves at the plate with two hits each while Mims and Zimmerman led the team with two RBIs each.

Co-Lin got things done much quicker in the nightcap as the Wolves scored two late runs in the top of the seventh to win 3-2.

Zimmerman put the Wolves on the board early with a ground out that scored Stephens who led off the game with a single.

Italiano drove in the tying and go-ahead run in the top of the seventh with a single that plated Zimmerman and Kyle Fielder who both also singled. Co-Lin was able to shut down the Lions in the bottom of the frame to earn the victory.

Austin Tidwell was the winning on the mound for Co-Lin. He allowed five hits and two runs over six innings, striking out 10. Konner Allen threw one inning in relief out of the bullpen to earn the save.

Zimmerman and Fielder led the Wolves at the plate with two hits each, while Italiano’s two RBIs led the team.