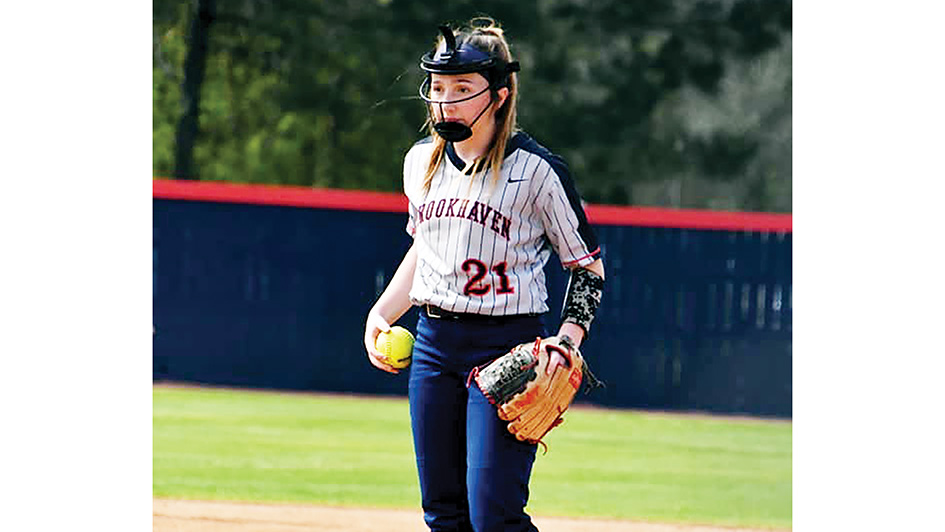 Photo by Stacy Leake Lynsey Nations of Brookhaven High picked up the win in the circle Monday night for the Lady Panthers. Nations scattered four hits and gave up only two earned runs in an 18-5 win over Salem. BHS travels to Salem Thursday.

Salem had gone up 1-0 after the first inning, but the Brookhaven bats came alive in their half of the frame. A triple by Meg Foster, a double by Lynsey Nations, and a double by Layla Woodall got BHS rolling as they scored four runs in the first.

Brookhaven would go on to score three in the second, two in the third and nine runs in the fourth inning.

A junior, Foster finished 3-of-3 with three RBIs including two triples. Madi Miller also hit a triple and put an RBI across to go along with her two hits. Kat Wallace also had three hits for BHS and was responsible for batting in three runs. Novalee Sullivan had two hits for coach Mandy Vinson and Caroline Speaks and Kaysha Register had one hit apiece. Nations, Woodall and Speaks all had an RBI apiece.

Nations picked up the win in the circle after giving up four hits in four innings and two earned runs. She struck out four and walked one.

Each team committed six errors apiece in the game.

Brookhaven returns the game at Salem Thursday with junior varsity action beginning at 5 p.m. Saturday the Lady Panthers are scheduled to play in the South Jones Tournament.